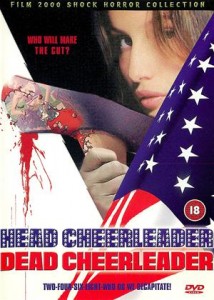 “Two-four-six-eight who do we decapitate?”

The awesome title and tagline combined with the appearance of Debbie Rochon makes me want to love this film. Really, it does. But I tried to love the later seasons of Lost and look what happened there.

Instead, what we have here is a crappy regional production with a killer axing bimbo cheerleaders in Briar Creek, South Carolina, on Halloween: the night before a big game. Chief pom-pom waver Heather is worried about her cat, while all her friends fall victim to a loon who can manage to chop boobs off girls who are wearing tight tops.

Most of the “action” is centered around Heather’s house, where a dozen random people come knocking at the door, or call her, including a sleazy prankster in a flatlining send-up of Scream, the film everybody was still trying to copy at this point in time. Could the killer be the football team’s pervy coach? One of Heather’s THREE ex-boyfriends? Or maybe its that weird religious girl who’s angry that she didn’t make the squad?

When revealed, the outcome plays like a parody of the end of fucking Scary Movie rather than Scream, or – heaven forbid – thinking up an original twist of its own. THEN a couple more twists are heaped on top in an effort to paper over the gaping plot-craters. It’s misogynistic, anti-gay, and trashier than a Honey Boo Boo marathon at a trailer park.

The only reason this gets that extra half-star is for the possibly authentic answerphone message that plays over the opening credits, from a concerned mother who thinks the production of the film will place real life cheerleaders – including her own daughter – in danger! No, honey, real psychos operate with a lot more class.

tagged with calendar carnage, gay stuff, get your own ideas!, Halloween, Nu-di-ty, rip-off central, Scream, slasher, what the hell!?, who finances this crap!?