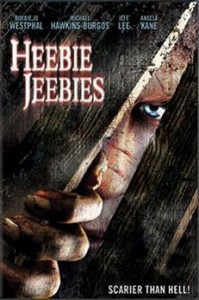 A bizarre horror anthology strung together against the backdrop of a gory little slasher opus.

Main character Cassie can dream the future, proven by forecasting the murder of her mother years earlier. Having experienced dreams concerning some old high school friends, she takes the most ridiculous action conceivable and invites them to a bogus reunion at a dilapidated house in the middle of nowhere: the perfect location for an all-out stalk n’ slash-a-thon.

We take intermittent detours into Cassie’s nightmares, which range from the acceptably strange (a sibling’s prank on his sister that goes too far) to head-scratchingly ludicrous (rock-monsters that come to life in the dark) via the mundanely twisted (a hit and run accident that gets progressively worse for the driver…)

Meanwhile, the teens in the house under-react to the rising body count, as they’re decapitated and hacked one by one. Ultimately, the coda wraps it up neatly enough, but the vignettes are so leftfield that it pulls the rug right out from under the confused viewer’s tootsies. Annoying more than anything.

tagged with slasher, weird-ass twist, what the hell!?, who finances this crap!?