Traditionally, society leads us to believe that killers are men, victims women – even more so when people address slasher films without having seen one. But wait up, a certain movie way back when totally changed it up when it led the audience into thinking they were watching a guy kill that string of sexy teens, but then BAM! it turned out to be a middle-aged woman with a grudge.

Hell hath no fury like a woman scorned, the adage goes, and boy – or girl – can they bring the hellfire when they want to. 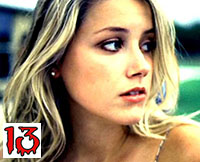 As the title suggests, aaaall the guys at school long to get in the pants of Mandy Lane – future Mrs Johnny Depp, and then ex-Mrs Johnny Depp, Heard (wasn’t she a lesbian at some point as well?)

Anyway, ATBLML has us believe that her friend-zoned pal Emmett is the killer, only to reveal that he is but her puppet, having manipulated him into offing her clique of high school friends, then betray him and crown herself final girl at the end to win the affections of the hunky ranch hand. 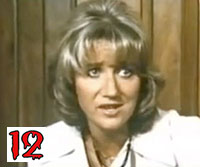 In an academy for aspiring young Olympians, a javelin-toting maniac is getting rid of the members of the so-called Magnificent Seven, who potentially may eclipse their own past successes.

Turns out it’s the level-headed nurse Diane, who had a sex change after a scandal to try and compete as a woman, but was disqualified over this too! Suckfest. Watch as she pitches her weapon of choice down difficult corridors in an effort to silence the teen who discovers her secret. Kirkland played again the killer in 2006’s Fingerprints. 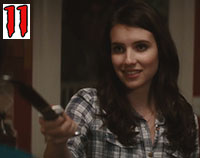 Sidney Prescott’s 17-year-old cousin is the criminal mastermind behind the new Woodsboro Murders. Sick of hearing aaaaall about her cousin, Jill intends to take the shortcut to fame and fortune, by setting herself up as the new Sidney and reap the rewards of professional victimhood. Emma Roberts does the nasty bitch schtick well, with a IDGAF attitude to go with her handy knife and, like Mandy Lane, ability to manipulate a boy into doing much of the leg work then take the fall for her. 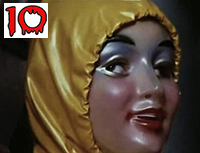 Devout Catholic Mrs T. can’t stand the bratty daughter of single mom Catherine Spages, and when she kills the wrong sister, goes about setting up Alice as the one responsible, digging herself a hole that a million Hail Mary’s won’t get her out of. A real sting in the tail of this viciously anti-religious pre-Halloween flick.

One time prom queen Victoria sits in her secret attic room staring into a mirror covered by a photograph of her younger self, listening to old 50s records and pretending it’s all good – until students move into the rooming house her mother and brother run, and they serve only to remind her of her youth to the point she goes even more cuckoo. Horror Queen Steele is as awesome in the role as you think she’s going to be. 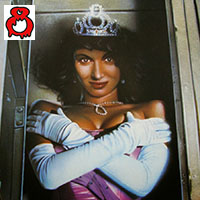 Promiscuous prom queen Mary Lou is burned to death by one of her many ex-boyfriends on the night she’s crowned queen at Hamilton High, 1957.

Thirty years later, her spirit is unleashed and she embarks on a supernaturally assisted killing spree, returning again in the third movie as a female counterpart to Freddy Krueger, serving up all manner of inventive demises for teachers and students, including making lockers squish a girl, death by ice cream, battery acid, and super-charged football. 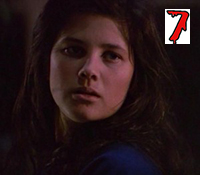 Ye olde evil twin cliché is realised excellently in this late-to-the-party slasher, which sees college kids undertaking their sorority hazing menaced by a shadowy killer after hours in a huge department store.

Turns out the weird dreams heroine Kelly has about broken dolls, a fire, and many reflections, are actually memories of her until-recently institutionalized crazy twin, who intends to kill and replace Kelly with herself. The revelation scene is camper than a row of pink tents. 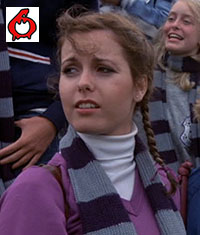 Wah wah wah, nobody came to my birthday, bellows weepy heroine Virginia to her best friend Ann, hostess of the party they all went to instead. Years later, when both girls are members of the Crawford Top Ten – popular clique at a prep school – it turns out to be Ann who is offing the grown-up teens who dissed Virginia’s party years earlier, because they’re half-sisters blah blah blah. The camp-tastic Scooby Doo ending salvages the movie from being a write-off. 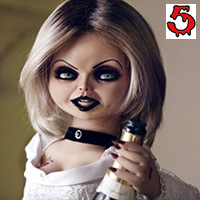 In life, Charles Lee Ray’s girlfriend Tiffany Valentine might have killed a few schmucks here and there, but in death and resurrected as a doll companion to Chucky, she goes into homicidal overdrive, infamously shattering a glass ceiling over a canoodling couple on a waterbed below, doing it with an evil grin throughout. Check out the scene in Seed of Chucky where she attempts to apologise to family members of her victims.

“You used an urban legend to kill my boyfriend, and noooow…” Although the physical requirements of the killer in Urban Legend look to be way more than model-esque Brenda could hope to live up to, unless she’s packing major muscle out of sight, the revelation that she’s offed nine students and staff of Pendleton University and based each murder on an old sleepover tale is nothing short of amazing. If you thought the bitchy exposition at the end of Happy Birthday to Me was sending the needle over the end of the camp-o-meter, this practically breaks the fucking thing.

Kevin Williamson wickedly paid homage to Friday the 13th when unveiling the second killer at the end of Scream 2. In contrast to everyone else I know, I guessed the other killer but not Mrs L., so it was a juicy surprise when it turned out she was the brains of the project, designed to reap revenge of Sidney Prescott for killing her dear Billy.

Nobody does deranged quite as theatrically as Metcalf (see also the episode of Desperate Housewives where she held a supermarket full of shoppers hostage) and her furious rantings during the final act haven’t been equalled by any of the late-90s slasher crop. 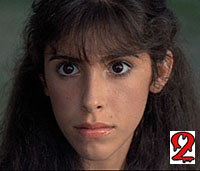 Who would suspect the shy girl at Camp Arawak could be behind the bizarre series of deaths that plagues the joint? From wasps nests thrown into bathroom stalls to death by curling iron, Angela is a particularly inventive psycho, and even if it turns out that she is in fact he, for all intents and purposes the film has a female killer. 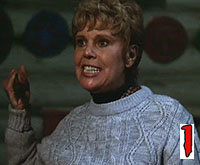 Could there be any other victor? I do wonder if without the final reveal in Friday the 13th the film would have been viewed even less favourably by critics at the time? Who knows, but however you cut it, it was a smart move on behalf of Cunningham and Miller to toy with the audience’s expectations in this way, only to have your average mom turn out not to be all open arms and sympathy, instead coming at you with a knife and the most insane grin to grace the silver screen.