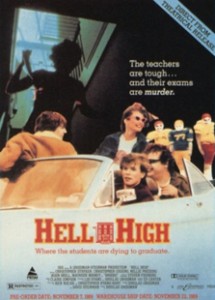 “The teachers are tough… but their exams are murder.”

Charmingly cheap stuff in which a quartet of high school rebels (they have leather jackets and shades, so we know this to be true) decide to get even with their strict bio teacher, Miss Storm, after she has a classroom altercation with their obnoxious ringleader. Unbeknownst to our little tribe of James Deans, teech has been hiding a shady secret since her pre-teens and, when their revenge prank goes too far and they believe they’ve killed her, they make the error of hanging around to cover up their involvement and frame a classmate. It soon becomes apparent that Miss Storm is not as dead as they thought and has also gone a bit loopy in the wake of their gag. Loopy enough to bludgeon, piece, and stab them to death anyway… 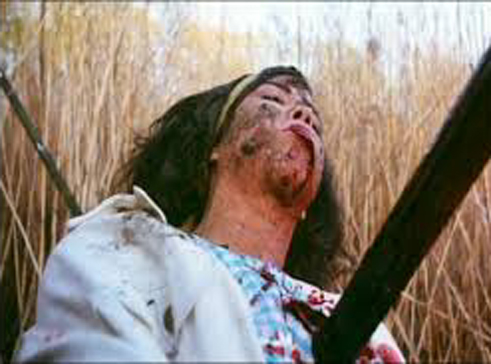 A straightforward, no-frills effort from one-time director Grossman, with the marked difference of electing a final boy (who looks like Judd Nelson) rather than the usual girl, and pretty much closing the book without a convoluted twist to cap it off. Due to its shortage on much of anything, Hell High was shelved until 1989 and actor Stryker had died in the interim, but has enough going for it to warrant the once over.

tagged with Nu-di-ty, slasher, the 80s