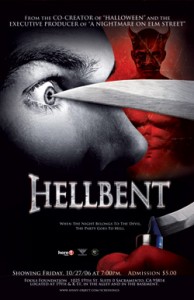 “When the night belongs to the devil, the party goes to hell.”

But think about it for a mo (har-de-har-har) and you might see why. Final Girls are intrinsic to the genre, strong girls who ‘don’t belong’ in the norms of society. Often, she’s the part-outsider, a factor which aids her in seeing and subduing the maniac who’s been laying her dim-witted friends to waste while they screw each other in the woods or the abandoned cabin.

P’haps we benders identify with her. Or maybe the killer? He’s an outsider too and he likes to rid the world of stereotypical teens who, we can arguably assume, are so self-absorbed that they’re everything-phobic. Jocks, bitchy cheerleaders, not historical Friends of Friends of Dorothy in the slasher realm.

Endless rantable theories aside, Hellbent is one of two existing queer slasher flicks around. The other one is lez-fest Make a Wish, in which girl-lovin’ girls go camping, get laid, get knocked off. Hellbent is a slicker affair, pulling focus on a quartet of Californian goodtime boys, out to party at a Halloween carnival, only to be stalked by a buffed up maniac, dressed as the devil and equipped with a sickle that most would think was a harmless costume shop toy…

We meet our Final Boy, John Barrowman-alike Eddie, an all-round nice guy working for the cops, possibly hoping to be one. He’s held back for a reason that later becomes cringingly evident in a scenario never before seen in a slasher pic! He and his three buddies; pill-popping sex addict Chaz (cowboy-gay), his younger brother Joey, the shy newcomer to things (S&M gay), and Drag Queen for-the-night party dude Tobey (uh…Drag Queen gay). They fill archetypal victim and gay roles, neither as responsible nor watchful as Eddie. 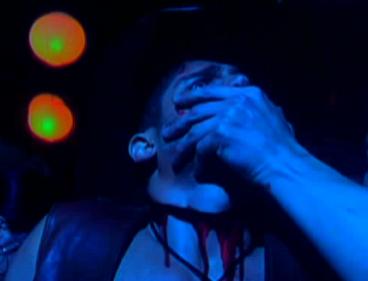 Once the carnival gets swingin’, the killer turns up, having previously spied the quartet at the site of his previous slaying when they stop for a looky-loo. Meanwhile, Eddie encounters James Dean-wannabe biker boy Jake, tempting and sexy, just what Eddie needs. Now, the killer is no puritanical Reverend or member of the Phelps church, he’s a gym-pumped Adonis in a horned Devil mask who appears in the shadows, in the dimness of the forest or the strobe lights across the dance floor. Sticking to the genre rules like flypaper, Eddie is attacked by the killer but is too late to save his friends, who are either off their heads on pills or simply off their heads. Period.

The executions are dripping with claret, albeit computer generated grue, they’re still quite brutal. But then if you’re going to collect gay-heads then it’s not going to be something Kim & Aggie would approve of when it comes to mess-management. Unless you’re Dexter. 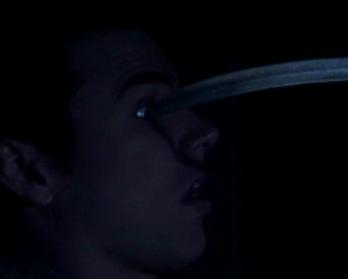 Things are capped off when the killer visits Eddie’s home to crash his intended kinky consummation with Jake – featuring handcuffs! Severed heads fall out of cupboards, sickle blades pierce flimsy apartment doors. There’s a whole lot of Halloween to it.

As the gay loveletter to John Carpenter’s flick, Hellbent is effective and fun but lacking in queer-soul that gives homo dramas like The Broken Hearts Club depth, like helmer/scribe Etheredge-Ouzts was too busy trying to make the film blend in with its straight bretheren to bother making sure it was wearing its Pride flag on its sleeveless muscle shirt. It’s a thin line so I may as well perch on the fence over the issue and be thankful there were no morality-play allusions. I’m shutting the hell(bent) up now.