For Final Girl‘s Film Club, the assignment was the 1981 goth-slash-classique Hell Night, definitely a mainstay of my slasher movie Top 20, if not Top 10.

As I’ve already reviewed Hell Night in full here and didn’t fancy my chances of fashioning a costume to go with the flick (though I’m due respect for sewing up holes in my gloves last week) so I decided to render my favourite moments of Hell Night… in Lego. 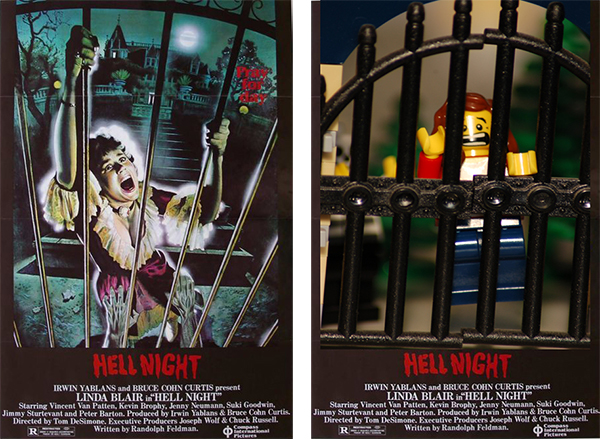 Drink in the likeness!

So… the Hell Night plot is simple and sweet: Alpha Sigma Rho fraternity pledges and those of its sister sorority (same name? I don’t know how the Greek system works) Jeff, Seth, Marti and Denise have to spend one night in Garth Manor as their final initiation task.

Garth Manor was the scene of a gruesome mass family-i-cide 12 years earlier but not all of the bodies were found. ‘Gorked out’ Andrew Garth is rumoured to still live in the joint.

The quartet of plucky adventurers flirt, drink, pair off and while pranks are played on them by a trio of upperclassmen outside, Andrew, it seems, objects to the intrusion and begins offing everyone on site one by one by one by one…

What makes Hell Night such a rocker is that it simply goes further than most of its brethren by drawing more likeable characters than expected. Most of the primary cast are worthy of survival on their own merits and, in some cases, it’s even sad that they have to die. 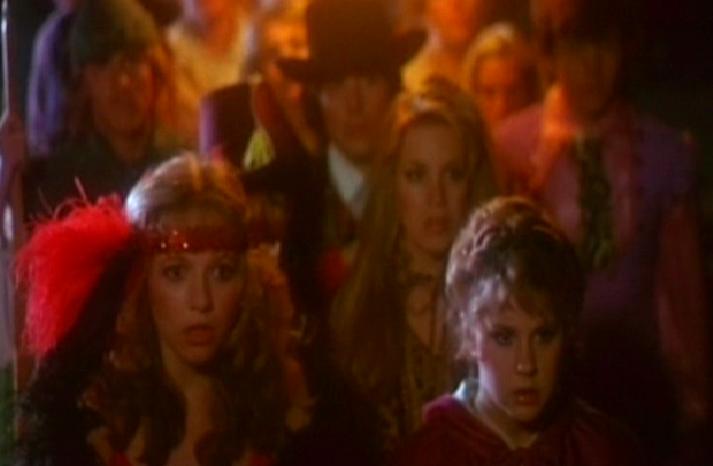 Linda Blair, as Marti, makes for a sympathetic, slightly out-of-the-box final girl. Yeah, she’s a mechanic with a boyish name and she makes sensible decisions along the lines of “let’s get the fuck away from here!” but her slightly plump figure in period costume gives the flick that Hammer-style gothic appeal, fusing two genres nicely.

While it’s not gruesome, the happy kids of Hell Night find themselves beheaded, impaled with sickles, tossed out of windows and having their heads twisted backwards.

OK, back in Hellego Night, things are a little more, uh, “daylightey” – but rest assured the horror was just as frightening for Lego Marti and pals. As it goes, Marti is left to scramble out on to the roof… Then she finds her beau-to-be, Jeff, dead after not making it through the window as efficiently as she…

Then she finds Peter, the prank-playing  frat president impaled in the maze… (OK I know the film still shows Jeff finding him and I should’ve thought about that before setting up the diorama with Lego Marti rather than Lego Jeff (who had an awesome hat!))

In conclusion, Hell Night translates nicely to the Lego realm, dontcha think? Lego Marti kicked as much ass as Linda Blair. Look at that complacent victorious grin she has!

I love Hell Night. Really, I do. It’s a classy little shindig that’s probably a plodding, slow bore for the A.D.H.D. audiences of today. Could you honestly imagine sitting in a cinema with a group of bloodthirsty teenagers while it takes Jeff and Marti about seven minutes to walk around a room trying to identify an extraneous clicking sound? No. They’d be all like “Wah! It’s too slow! Wah! Why’s there no tuneless rock music blaring throughout! Wah! Wah! Wah!”

I say it again, I’m mid-thirties and I did this with Lego. I’ll go away and re-evaluate my life now.

tagged with Final Girl Filmclub, me me me!, slasher, the 80s