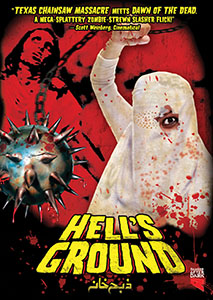 Laughter Lines: “He’s a shit-sweeper’s son and always will be!”

In a similar way to Indian Bollywood slasher Kucch to Hai, Pakistan’s entry into the genre, by way of a zombie B-movie, is a derivative little gem of a flick, reminiscent of a forgotten American 80s cheapo.

A quintet of city kids lie to their parents in order to drive their minivan to a rock festival. Unfortunately, their route takes them into the countryside, where toxic waste has contaminated the water supply and turned the locals into flesh eating zombies, one of which takes a chunk out of one of the teens. They flee and, after taking aboard and soon tossing out an unhinged hitcher, eventually break down deeper in the woods and fall victim to a burka-disguised, mace-swinging psychopath. There’s an old woman who may or may not be involved and, as the teens split up for various reasons, numbers are whittled down to good-girl Ayesha, who is forced to resort to a brutal counter attack in order to survive…

The film, titled Zibahkhana, in Urdu (the actors speak a mix of their native tongue and English throughout) has interesting cartoon-still inserts that fill in for uncertain turns in the story. There’s a cameo appearance by actor Rehan, who played Dracula in Paskistan’s 1967 version of that story.

Not for those averse to foreign imitators, this is a colourful distraction from the norm, especially the likes of Western 2007 remakes and jump-cut trash.