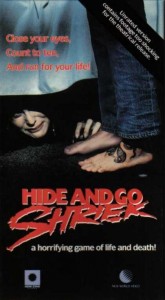 A.k.a. Close Your Eyes and Pray

“Close your eyes, count to ten, and run for your life!”

In the end, it falls somewhere in the middle. It’s alright. Once, anyway.

Eight teenagers with assorted sizes of hair – but in the XL range – celebrate the end of high school by partying after hours …in a FURNITURE STORE. Live it up, kids.

Once covertly therein, the kids regress in maturity and decide to act like pre-schoolers and have a game of hide and seek. Well, they had to pay homage to that deliciously pun-tastic title some way, right?

Amidst the games, jokes, and eventual sex-centric encounters, they begin to get wiped out by a shady killer who dresses up in the clothes of his most recent victim. Like in Terror Train. Teens are drowned, stabbed with mannequin limbs and tossed on to sharp arty thingies. 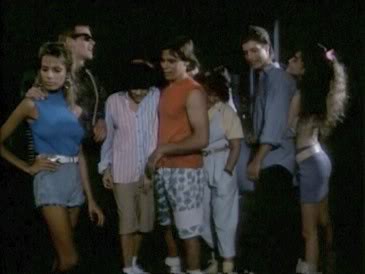 There are some gory murders but dim lighting becomes irritating as it grinds on, along with some of the surviving characters – FOUR of them in this film – all of whom have undergone personality bypass procedures. But there are a couple of creepy scenes: the cover gives away one such scene where a walking-bouffant hides under a bed as a scary pair of feet stride by and the decapitation-by-elevator is well done.

Sadly, in the final act, the film collapses into a downright strange propagandic, homophobic and rather wasteful piece of work. Too many characters survive and the identity of the killer pretty much pops up as an afterthought. That “better than average” acting? Yeah, it’s okay. There’s more room for tearful expositions with a reduced body count. Although, the fact that lead actress Jones is called Rebunkah has enabled me to call all people I meet called Rebecca by this name.

Worth a look if you’re a fan of enormous perms, banana clips, and day-glo fashion wear.

Blurbs-of-interest: Bunky Jones turned up in Grotesque under the name ‘Bunky Z'; Brittain Frye was later in Slumber Party Massacre III; Sean Kanan was in Hack!; Jeff Levine had bit parts in A Nightmare on Elm Street and Elm Street 4; Skip Schoolnik was the editor on Halloween II.

tagged with get your own ideas!, gore o'clock, hair don'ts, Nu-di-ty, slasher, slasher films that aren't supposed to be funny but are funny, the 80s, weird-ass twist