The Bollywood Slasher Movie That Wasn’t 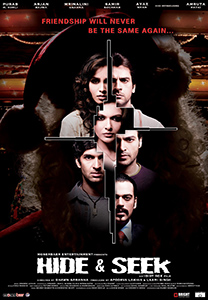 “Friendship will never be the same again…”

Laughter Lines: “Kill me. That’s what I want this Christmas. I want to die.”

This Hindi I Know What You Did Last Summer clone is short on choreographed dance numbers and bloodletting, but has an innocence about it that is kind of endearing, plus a pretty good chase scene at the halfway point.

Twelve years ago, teen friends Om, Jyotika, Abhi, Jaideep, Imran, and Gunita were involved in some sort of accident because of an argument over a fucking snowglobe. We don’t know what happened, but intermittent flashbacks show us there was likely a shooting.

After he’s released from an institution, Om reunites with Jyotika, and they all start receiving texts, letters, etc. that say ‘Caught You’, alluding to the game of hide and seek that started their evening of terror. They’re each abducted and wake up in an abandoned shopping mall where a Santa-clad loon informs them via videolink they need to play the game or face deadly consequences.

They split up and hide, but things are thwarted and if Santa isn’t after them, they’re after each other. Ultimately, only two of the group are killed by the masked maniac, the rest shoot each other for various reasons, including  ‘I raped you because I love you’, and we find out the full extent of the past crime, which leads to an unexpected but not entirely original twist, that saves the film from one-star-city, but fails to compensate for the basic lack of thrills up to that point.

Essentially, it’s a slasher film without any slashing, so is something of a dead loss.

tagged with blood feast from the far east, get your own ideas!, slasher