The Hollywood Hills Have Eyes 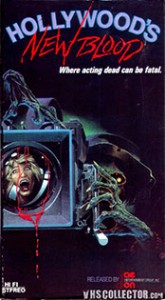 “Where acting dead can be fatal.”

Marginally less of an endurance test than The Last Slumber Party, still Hollywood’s New Blood, at a meagre 77 minutes (10 of which are credits and an unwanted recap of the ‘best bits’), feels longer than a Star Wars marathon.

Young folks at an ‘acting seminar’ at the woods by Storm Lake, outside of L.A. (looking suspiciously like Griffith Park) are set upon by a trio of brothers, thought to have burned to death in an accident years earlier. They’re pissed and they hate actors.

Firstly, the great irony of Hollywood’s New Blood is that these people are attending an acting class, yet unaware of the genre they’re in. At one point, a guy finds the body of his pal tied to a tree and just grunts like he missed a pin at bowling, then stumbles across two more slain corpses and strides off without so much as a shrug. 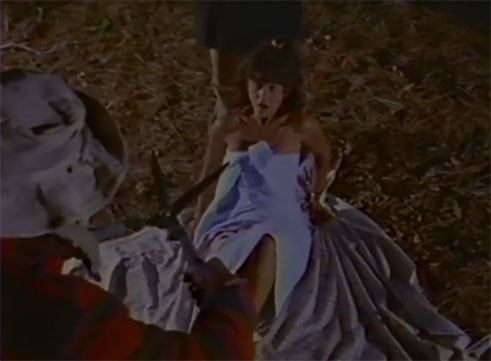 Mucho wandering around the same small patch of trees under the same shot of a full moon or the same exterior shot of the cabin they were all in… This is the type of movie where people can’t see a shady figure who’s standing two feet away.

The villains, on the other hand, look like a cross between the greasy family from Pete’s Dragon or extras from The Fog, who’ve accidentally stumbled on to the wrong set.

Small points are earned for mullets, death-by-skull (!) and the earlier amazing moment where one of the characters finds said skull and takes it for a little show and tell: “This is no animal – these bones are human.” No shit. It’s a motherfucking SKULL.

You can at least have a good chuckle watching Hollywood’s New Blood, suffering through the dreadful title song that goes over the Greatest Hits compendium after the actual 67 minute film has ended, which is more than can be said for some other examples from the era.

tagged with get your own ideas!, hair don'ts, slasher, the 80s, what the hell!?, who finances this crap!?, yo! Hollywood