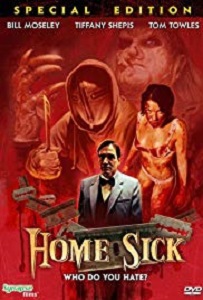 Laughter Lines: “When a psychopath can invade the sanctity of your home and bleed all over your furnishings… we’ve fallen on dark days.”

Appearances by Shepis and Rob Zombie staples Moseley and Towles seemed to push Home Sick into some odd cult following when it appeared in 2007. Gory, squelchy FX notwithstanding, the ‘great slasher film’ that was promised failed to materialise from beneath this surface of grue.

Entirely unlikeable young folks gather at a dead house party thrown by asshole Tim, which is crashed by Moseley’s admittedly creepy Mr Suitcase, who opens said case to reveal it’s full of razor blades. He then asks each of the attendees to name someone they hate, culminating with the host stating that he hates everybody in the room. Stupid dick. Those named – exes, dealers etc – are violently murdered by a masked loon.

Things sound okay but about halfway through, the majority drag the group to Tim’s survivalist dad (Towles), dance around with guns, and then fall victim to the killer, who is now revealed to be some random demon, not hugely dissimilar from the one in Jeepers Creepers.

What does this have to do with Mr Suitcase? Why is it happening? Why do characters start laughing hysterically for no reason? Forget getting any answers. Instead, we’re left with a crap final girl and some hazy ideas that perhaps some sort of Texas Chain Saw homage was attempted here. Who do I hate? This film. Bye.

tagged with gore o'clock, slasher, who finances this crap!?