Nice day for a… Shite wedding 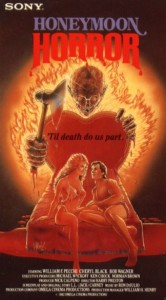 Dire-logue: “It’s the biggest piece of meat I’ve ever seen.”

“Something grabbed my ankle,” a girl says in Honeymoon Horror.

“Maybe it was a bridge?” comes the reply from her friend.

A bridge. I rewound the tape several times to be sure years of screaming music through headphones hadn’t worsened my tinnitus. Yes, she suggested a bridge grabbed the first girl’s ankle.

This rape of sensible scripting notwithstanding, in this paper-thin imitation of Friday the 13th by way of The Burning, a disfigured maniac, who resembles Uncle Fester, stalks and kills the female honeymooners spending their first post-nuptial night on an ugly as fuck little island owned and run by said maniac’s ex-wife and her new lover. Together, they burned the dude some years earlier.

An intriguing piece of inexplicably sexist trash, director Preston seems to forget events that have already occurred. Meanwhile, the killer hacks and hews his way through the blushing brides with a handy axe until all who’re left are huddled together in a central cabin.

Some gory murders interpose the cliched pattern of goings-on, but the effects are godawful with too-thick or too-thin blood pumping from inflicted wounds while the corpses are quite obviously still breathing.

Throw in a mute, retarded caretaker, characters who repeatedly insist they’re “perfectly safe”, a cigar-chomping Sheriff and an English maid whose only two lines of dialogue sound like they’ve gushed from the mouth of a 19th century East End prostitute.

If there was ever an excuse not to get married, this is it.

tagged with Friday the 13th, get your own ideas!, rip-off central, slasher, slasher films that aren't supposed to be funny but are funny, the 80s, what the hell!?, who finances this crap!?