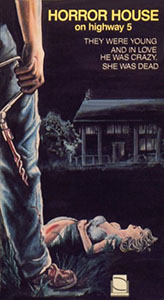 “They were young and in love. He was crazy. She was dead.”

Laughter Lines: “I think I know a secluded place where you can complete your project.”

1985 was a sucky year in horror from the casual observer’s perspective: Elm Street 2 (I like it!)… Friday the 13th Part V (I like it!)… But all those people who bitch about Friday 5 should be forced to sit and watch Highway 5.

As a viewing experience, it seldom gets any weirder than Horror House on Highway Five – which was actually shot in 1983 – that trying to explain what fragments of a story there is could prove entirely redundant, but here goes… 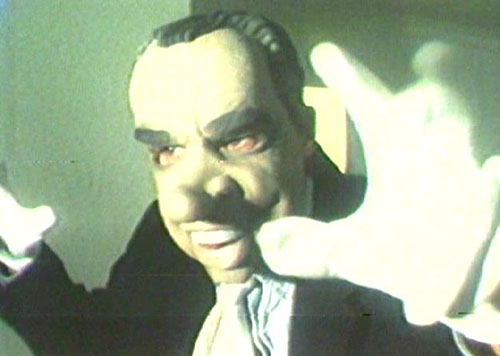 What the intentions of Horror House are remain a mystery. It’s got some Plan 49-style crap appeal in parts, but the 88 minutes feel more like 188, it’s difficult to tell what’s happening on screen and whomever was tasked with providing the cello music for ‘tense’ moments might’ve bothered to learn some notes first. Is it a joke? It it serious? Shot at the height of the American irony crisis of the mid-80s, it’s hard to call.

As an LSD experiment, it could prove to make for interesting watching but barely ticks any slasher movie boxes anyway. You’ll certainly be left with a lot of questions. But rather than regurgitate what those might be, here’s some additional Laughter Lines, neither of which can do justice to how bad they are delivered: 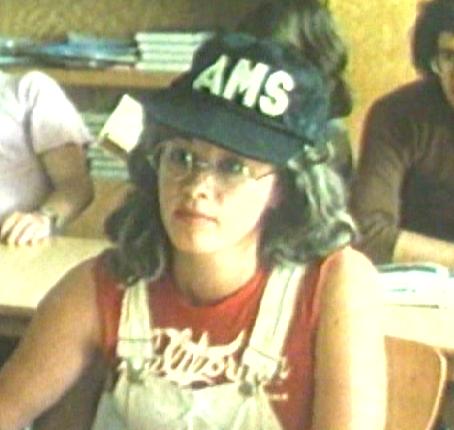 Wardrobe choices are vile, with Louise (above) spending most the film in white dungarees. That hat sadly landed on her head only for this scene and then flew away for good. For a “teenager”, Mike has a big receding hairline. On occasion, there’s absolutely no dialogue or screaming where there perhaps should be.

Completists and fans of psychotronic, drug-fucked mind-trips are probably the only recommended audiences. Everyone else – scratch that – EVERYONE should stay clear.

tagged with I want to die, Nu-di-ty, slasher, spoilers, the 80s, what the hell!?, who finances this crap!?