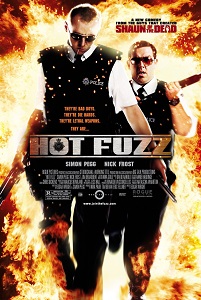 Laughter Lines: “You wanna be a big cop in a small town? Fuck off up to the model village!”

Huh? Are we really calling this a slasher film? No, of course not, but let’s also not ignore the fact that a sizeable chunk of Pegg and Frost’s best is just that – with a cloaked mystery killer axing, roasting, shearing, and dropping plinths on to the residents of Sandford.

I’m not massively impressed by Simon Pegg’s schtick usually. Yeah, Shaun of the Dead was funny immediately after Dawn of the Dead (I watched them back to back) and the guy knows his movie shit inside out, but I’m unable to escape a sense of self-satisfaction that more likely comes from all the media gushing than Pegg himself. See also: Ed Sheeran. Weirdly, I love Nick Frost in everything. But let’s forget all that, because Hot Fuzz transcends all of those thought processes with it’s 26-jokes-a-minute tempo.

Pegg is Sgt. Nicholas Angel, literally London’s finest who is shipped off to the small country town of Sandford after his superiors become aware he makes the rest of the Metropolitan Police force look bad by comparison. He is the job and the job is everything, which is why his relationship also failed. With no choice in the matter, Angel grumpily plods off to pastures new, where the local force of various inept and unchallenged officers has little to do other than show up at fetes and hunt down wayward swans.

Angel’s law-is-the-law attitude doesn’t go down well with his new colleagues so none of them are inclined to agree with his hypothesis that a killer may be on the loose when members of the community start dying is grisly ‘accidents’, starting with a double-decapitation by road sign, an explosion, and part of a church spire landing directly on the local journalist’s head, seconds before he was to share valuable information he’d learned with Angel. 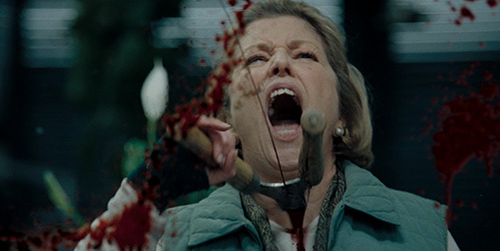 Only Nick Frost’s loveable PC, Danny, remains on side, keen to end up in a gun fight right outta Point Break or Bad Boys II, but Angel eventually offends everyone and then finds himself in need of their help once his suspicions turn out to be true and there is not one, not two, but an entire cult of psychotic townsfolk so hell bent on winning Village of the Year, they’re willing to permanently rid the place of anyone who might endanger the trophy. Yes, it’s Scooby Doo on speed.

Hot Fuzz switches to buddy cop movie for its final act – by way of a few borderline homoerotic near misses – with a huge shoot-out between cops and the kind of sweet middle-aged lady you see pedalling past with flowers in her basket. The film misses nothing in its composite of set pieces, cameos, and the tiniest details, all of which come back to play a valuable part later.

The only flaw is a gaping hole for a central female role of any real stature, with Olivia Colman’s perky WPC the closest. But this is boys stuff, made for lads by lads, so there’s no time to be wasted on that kind of PC stuff. This came out at the peak of the Pegg/Frost/Wright hype machine, so it would be entirely possible that it’s overrated because of this, but watching it again the other day to write this up, it still had me laughing out loud several times.