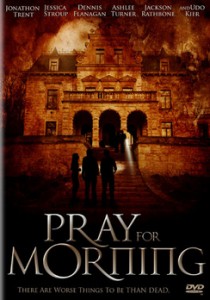 A closed-down mansion hotel with a curse on it! Ooh, I loves me summa that.

June 5th, 1984: Five high schoolers spending the night in the long since closed Royal Crescent Hotel are murdered, ending the tradition of young graduates taking this rite of passage into adulthood…

Twenty-something years later, fascinated teen Jesse and seven friends decide to break in and explore the premises for the sheer thrill of it. They’ve got crime scene photos and want to visit every murder site in the old place. Once inside, it becomes clear that all is not right with the spooky place. Decomposed body parts are found, apparent vortexes make navigation impossible, spectres appear and every time a strange shimmery light turns up, someone dies – their bones broken, the ends poking gruesomely through the epidermis.

Pray for Morning is like taking a playdough effigy of Hell Night in one hand and one of The Shining in the other hand and squashing them together until the colours merge and you can craft a mix of the two. There are some genuinely creepy visuals early on and it goes in a different direction to what’s expected, electing a supernatural villain who has magic powers at his disposal. 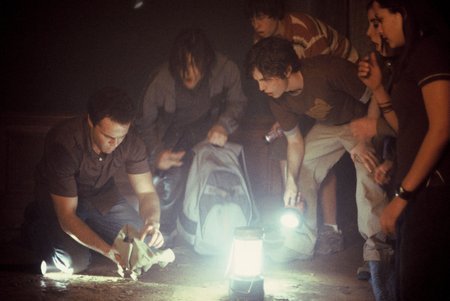 However, when the story knocks on the door of reincarnation we skate on to thin ice and it risks collapsing under its own weight of suspension of belief. This negative effect is lessened with interesting teen characters and some good dialogue, making it better than many other recent efforts and plus we get to see a Disney presenter’s neck broken, always a treat.

There’s essentially a degree of care here that’s often absent in low-rent body count films but it’s perhaps just that tiny bit too pretentious for its own good.

Blurbs-of-interest: Robert F. Lyons was in Dark Night of the Scarecrow; Jessica Stroup was in The Hills Have Eyes II and the horrible Prom Night remake, making this her best foray into horror thus far. Udo Kier was later in The Editor and Fall Down Dead.