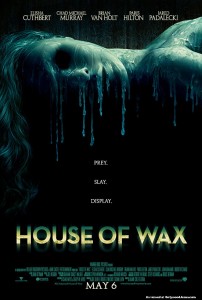 There are a lot of reasons that we should hate House of Wax: it’s a remake, it’s chock full of unrealistically good looking teen stars from various TV shows and Paris Hilton’s in it. Yes, America’s answer to Jodie Marsh (*shudder*) previously had a small role in the craptacular Nine Lives where she played a catty American fashionista (a stretch) and here, as girlfriend to Elisha Cuthbert’s textbook heroine, she does pretty well with the role and had to suffer much of the film’s advertising campaign centering around the opportunity to see her die!

Elisha and Paris are girlfriends to a couple of guys heading to a big football game; Jared Padalecki is Elisha’s squeeze and they are irritated by the presence of her twin brother Chad Michael Murray and his dorky buddy. Paris’s BF is – gasp! – black and doesn’t get much to do for the entire film. They camp out and the next morning find one of the cars immobile so Elisha and Jared stick around to go and find a new car part while the others skip off to their sacred game. 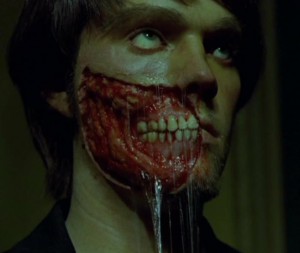 They end up in the tiny township of Ambrose, home to Trudy’s House of Wax (“it is wax – literally!”) and Jared is then captured by a looney psycho while Elisha tries to run away from the not-so-friendly gas station attendant. This all happens about fifty minutes into the film, having up until now featured very few scary things, although the DVD features a cut scene featuring the murder of a broken down motorist. Of course, we figured out ages ago that everyone in the town is made of wax and this happens to Jared, who is stripped, shaved and placed in a bizarro wax-shower thing that turns him into another model for the museum. 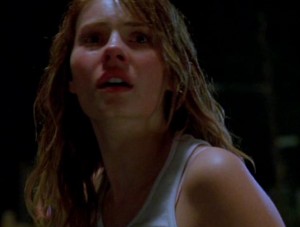 The others return and Chad and his dumbass friend go looking for his sister, split up, and one finds the gas station, the psycho therein and a finger-snipped Elisha while dumbass friend finds waxy-Jared and the sharp ends of a couple of knives that cut his head off. Paris and her BF get murdered next, hers is a protracted chase through a rusty old parking garage, reminiscent of Wendy’s chase in Prom Night, until the moment 95% of the audience bought their tickets for occurs and the killer skewers her with a rusty javelin, right through the head!

Chad and Elisha are soon running for their lives and set a fire which begins melting the House of Wax from within, which looks pretty cool until the effects department evident got bored and just started to play around with the picture by bending it like the state-of-the-art special effects from Earthquake. In 1974. 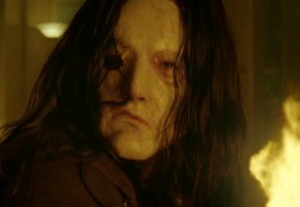 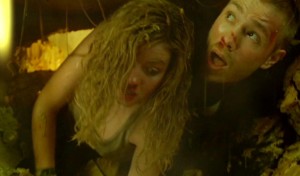 Blurbs-of-interest: Jared Padalecki graduated to a surviving role for the Friday the 13th remake; Jon Abrahams was in Scary Movie. Casting-bod Mary Gail Artz was an actor in Don’t Go in the Woods.