Before Wolf Creek, there was… 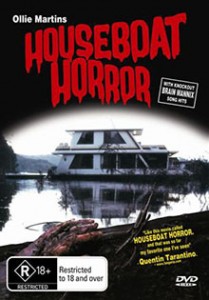 “Something is about to happen on Lake Infinity.”

Laughter Lines: “You watch it – or I’ll kick you where your mother never kissed you!”

Back in 1989, Britain was in the midst of its obsession with Australian soap operas: Neighbours was at the top of the tree, while Home & Away perched a few branches below. I preferred Sons & Daughters - so many Mafia-like plots within a small cast, poisonous snakes in the safe, shark attacks… it had it all.

Thus, when sitting down with Houseboat Horror recently, that nostalgic era of Scott and Charlene, Helen Daniels, Madge and Harold, Bouncer the dog, and Ramsay Street – surely built on crossing Ley Lines for all its bad luck – came a-floodin’ back. So much so as Alan Dale, who played Jim Robinson in Neighbours for years, was somehow roped into appearing in the floating turd that is this movie. Ants may elect to make a houseboat out of said turd and the cycle begineth again.

A crappy rock n’ roll band and a film crew head out to Lake Infinity to shoot a music video. Naturally, the lake was the scene of a tragic fire (or some murders, I’ve already forgotten) X-years earlier. A newspaper tells us a child was horrifically burned. See where the course has been set? So laboured is this point, that early on when the group stops at a gas station, one of the attendants turns to the other and says: “Brings back memories over those movie killings a few years back…” and the world’s most obvious this-sounds-creepy synthesiser note is struck. 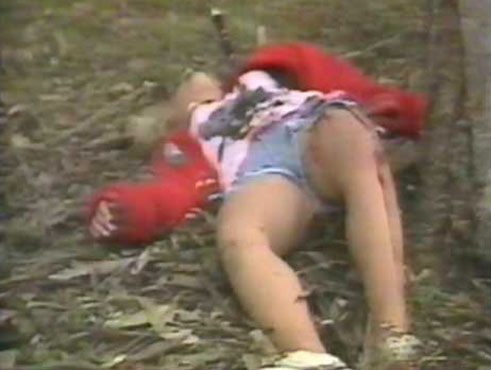 The group hire three ugly-ass houseboats and, after a day of fooling about with the really shitty band, are stalked and slain by a shadowy chap who lurks in the trees a lot. People are sliced with his machete, axed in the head, shot with spearguns, and even killed by a horseshoe in the eyes.

There’s very little more to say about Houseboat Horror. It’s cheap, it’s brimming with Aussie sayings of yore (people referred to as ‘dags’ who might’ve ‘shot through’) and it’s dated by an appearance of the world’s largest cell phone, which Alan Dale says into: “The two-way doesn’t work so if you want to talk to me you’ll have to do it on this walkabout phone thing.”

Some gory dispatchments and the mild distraction of different accents and vernacular highlight an otherwise awful vessel (ho ho ho) before it sinks under its own weight of crap.

tagged with gore o'clock, hair don'ts, obvious identity of killer, Oz, slasher, slasher films that aren't supposed to be funny but are funny, the 80s, who finances this crap!?