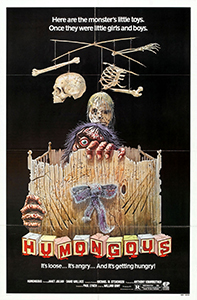 “Here are the monsters little toys. Once they were little girls and boys.”

Laughter Lines: “Wave to Donna, she wants you to see her tits again.”

Prom Night director Paul Lynch made this ultimately disappointing tale of brothers Eric and Nick, their sister Carla, and girlfriends Donna and Sandy crash their cruiser into rocks amidst a fog in a channel by a remote hole known lovingly as Dog Island.

A stranded fisherman they pick up informs them the only resident is a scarcely seen mad old lady. Stuck on the island, the teens begin to split up to look for help and find the now missing Carla. To the surprise of nobody except the cast, a maniac is also roaming the overgrown isle with a taste (and not just of the metaphor kind) for teen blood. Turns out that he is the mutant son of said mad dame, the product of a rape seen in the opening few minutes in 1946, and a bit hungry since mom died and cut off his access to the outside world.

While relatively well pieced together on a visual level, the 89 minutes slog by with all the speed of a one-wheeled shopping cart, and the dimly-lit or totally off-screen murders don’t punctuate these slabs of boredom adequately. As for the cast, Julian does well as the final girl who obviously watched Friday the 13th Part 2 before the boat trip, as she mimics the killer’s dead mother to stop him in his tracks. This is the film’s best scene. The only other impressionable presence is Baldwin as Carla, with her huge glasses and lifejacket, she portrays the only memorable character in a film otherwise filled with assembly-line bimbos and wannabe-Rambo’s.

Blurbs-of-interest: David Wallace was also in Mortuary; Joy Boushel has a small role in Terror Train; Garry Robbins was one of the three mutant-men in Wrong Turn.