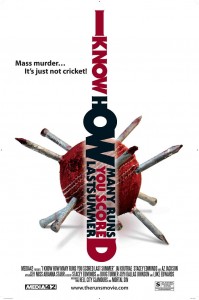 I KNOW HOW MANY RUNS YOU SCORED LAST SUMMER

There’s no rest for the wicket in this no-budget Australian mickey take; someone is murdering cricket players with associated implements and it’s all traced back to ye olde schoolyard bullying – the victim of which is hellbent on destroying those who permanently scarred him…

For reasons that only ever occur in the slasher flick, the investigating cops decide to gather the surviving members of the school team (notably all blokes) and herd them to a remote “safehouse” in the outback. What follows is obvious to the genre: unhappy-chappie materialises and adds to the carcass count with a spiked ball, sharpened wickets and a pseudo-Krueger glove of blades. There’s a also a crotch-defender/codpiece thing with nails hammered through it, forced into one victim’s pants before he’s kicked in the bollocks! The humorous ideas for permanently bowling out the characters are evident but often flawed by the budget constraints and several scenes look padded out to push the film towards a 90 minute duration.

That said, the Australian backdrop makes for an inviting change and the dialogue is littered with chucklesome one-liners and there’s also a twist that’s not so foreseeable (probably due to the simplicity of the entire project), all of which makes the film entertaining enough. The title, however, does not guarantee any cross-over material to I Know What You Did Last Summer, its sequels or content. And watch out for that mental gratuitous shower scene featuring Miss Nude Australia!

tagged with I know whatcha did!, Nu-di-ty, Oz, slasher