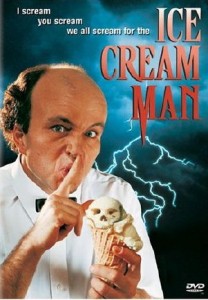 “I scream, you scream, we all scream for the Ice Cream Man.”

Dire-logue: “You little turds are gonna learn you can’t run from the ice cream man!”

There’s an IMDb review of Ice Cream Man titled ‘I Scream, You Scream, We All Screamed when we saw Clint Howard’s face.’ Quite appropriate.

Ron’s bro is the titular tormentor, Gregory Tudor, in this strange B-flick, in which he thinks nothing of grinding up the locals – mostly parents of the kids who accurately suspect that he’s the one behind a spate of disappearances.

A quartet of plucky kids decides to investigate for themselves when one of their gang vanishes (secretly a willing captive in Gregory’s aged ice cream parlour). Meanwhile, cops Lee Majors II (!) and Jan-Michael Vincent (!!) look into Greg’s past at the Wishing Well Sanatorium and try to pin something on him. Hussey plays a kooky ex-nurse who has a garden of plastic daisies. And there’s a fat kid named ‘Tuna’.

Similarities between this and 1991’s C-flick Mr Ice Cream Man are obvious to anyone who’s seen both, though the budget and crew competence here run circles around the other film. There are also rumours that the crew of the older film sued those of the latter, which was reportedly part-financed by Converse Footwear, hence the numerous shots of trainers/sneakers throughout.

The comic trimmings don’t always work; there’s a completely extraneous and prolonged scene in the mental institution that doesn’t seem to add anything relevant to proceedings and was probably inserted to pump up the running time. Disappointingly, our fiend doesn’t murder any kids at all, settling for cops, a neighbour’s dog, and a couple of unfaithful parents instead. The idea of a murderous ice cream man could be scary if he was offing the little darlings on the block – it was freakin’ scary in serial killer flick When the Bough Breaks. Ergo, it wouldn’t be hard to make a truly scary film of this ilk, but after two botched attempts to get the scoop into the cone, I doubt anyone who try balancing a third on top…

Blurbs-of-interest: Howard had a small role as a luckless patient in The Dentist 2; Hussey was, of course, the lead in Black Christmas and also played Norman’s ma in Psycho IV: The Beginning.

tagged with after they were famous, children are evil, get your own ideas!, star power, what the hell!?