I Snow What You Did Last Summer 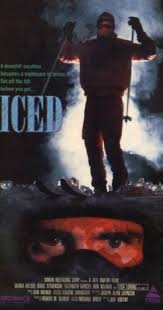 “A downhill vacation becomes a nightmare of terror. Get of the hill before you get iced.”

Laughter Lines: “It was one of those flicks where you only watch the film if someone’s naked or getting killed – or both!”

The height of summer! It’s too hot. Let’s cool down.

In 1988, some six years after major studios had lost interest in any slasher film other than franchise sequels for Jason, Freddy or Michael, somebody must have owed scribe/actor Joseph Alan Johnson a big favour when they made his soggy script into a film.

Why? Possibly because nobody had done murder on the slopes (unless you count the unknown tripe that was Satan’s Blade) and this left the door ajar for a new angle on a genre everyone was sick to death of. Be it ever so cliché in every other aspect, Iced isn’t actually that bad a film, just a little frosty around the edges.

Two guys fighting over a girl challenge each other to a late night race down the slopes, which will apparently determine who gets to hang out with her. The pissed off loser gets drunk and ends up skiing himself off a cliff edge onto some rocks and dying. Four years go by and his ex-friends (who don’t seem to like each other much) are invited for a weekend at a new condo for one of those time-share sales things.

Murder and mayhem ensure courtesy of a ‘mystery’ skier who is partial to dispatching his targets with ski poles, bear traps and even icicles. Could it be the not so dearly departed? Or has one of the group gone schizo after years of guilt and decided to redress the balance? With virtually no suspects other than that who is unmasked, it’s a very unexciting revelation and probably one that needn’t have been bothered with in the first place. That said, I can’t remember who the killer was. Impact.

Shades of both April Fool’s Day and The Big Chill creep in, and this was virtually remade in 2001 as Shredder, which is a lot more fun.

Blurbs-of-interest: Debra DeLiso later had a cameo in Initiation, and was one of the doomed girls in The Slumber Party Massacre, which co starred Johnson, who had the lead role in Berserker. Lisa Loring was in Blood Frenzy.

tagged with Nu-di-ty, obvious identity of killer, slasher, the 80s