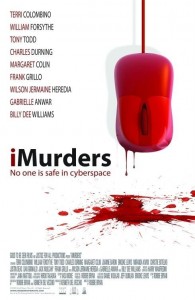 “You don’t know who you’re talking to…”

Dire-logue: “It’s difficult to put the milk back in the carton when you’ve already had the cereal.”

Look at that cast roster! Forsythe. Todd. Anwar. Durning. How could this film fail, you might ask? And yet…

iMurders is a strange one. It’s a film that borders several genres and has so many criss-crossed mystery plot threads that the writer’s of Lost would be envious. There’s a lot to resolve in just 99 minutes and things would likely work out better were this a mini-series like Harper’s Island.

Things begin usually enough with a woman returning home to find a blonde riding her husband’s lap. Faces are obscured and we flick to the exterior as voices are raised and a gunshot sounds.

Ten months later, Colombino’s pretty singleton, Sandra, moves into a new apartment and quickly connects back on to ‘FaceSpace’, the social networking site she’s obsessed with. FaceSpace. I think I hear you groaning! 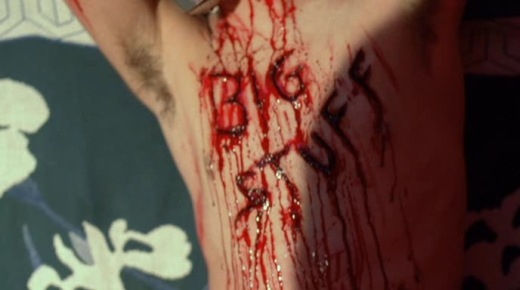 A group of eight super-friends meet religiously for online chats, during which LA FX artist Mark sets them a contest, the winner of which will be rewarded with some movie memorabilia. However, during their chat, Mark cops a powerdrill in the back of his head, which the others, watching over cams, believe is just trickery in accord with his Halloween-themed task…

Sandra becomes romantically involved with brooding ex-cop neighbour Joe, whose sister is an FBI Agent looking into both the chatroom murders and Billy Dee Williams’ crooked lawyer, who sets up attacks on people and then sues for them. His latest client, Anwar (the trigger-happy Fi from TV’s excellent Burn Notice), is a model whose face has been permanently scarred after she was attacked by a knife-toting loon in a nightclub. Consequently, she spends the entire film with a giant square band-aid stuck to her cheek.

Elsewhere, Forsythe is a philandering college professor trying to hide his ways from his missus and discourage an amorous co-worker. Durning is a shrink with a bizarre young client who babbles incoherently about the number 666, the chatroom and her dead lesbian lover, which allows, yet again, for a sleazy girl-on-girl scene.

Another murder occurs and brooding cop’s FBI sis and Agent Tony Todd (!) – for once neither a hook-handed urban legend or a death savvy mortician – sweep in and arrest bad lawyer and 666-girl and discover another of the chatters slain. As the script steers us towards suspecting Sandra of the killings, we think twice and realise that the killer is most likely that other person who’s always there, loitering… 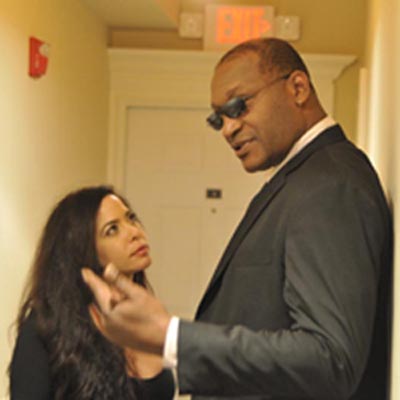 iMurders is a good looking production. I mean, if the director could get that cast, then he obviously knows how to call in favours. Its ambition is what uploads a virus into it; the top-heavy plot structure is simply way too much for the film to adequately cope with. In addition to this there are too many characters and the killer only manages to knock off a dismal three of the eight chatroom members. The token gay character is done away with first and the murders are too tame for a slasher flick and too brutal for a TV movie. CTRL+ALT+DEL out of this one.

Blurbs-of-interest: the music was composed by no other than Harry Manfredini, who scored nine of the Friday the 13th films; Anwar was also in Crazy Eights; Forsythe was in Hack! and the Halloween remake; Dan Grimaldi was in Don’t Go in the House; Todd was also in Final Destination‘s 1, 2 and 5, Hatchet (and its sequel), Jack the Reaper, Scarecrow Slayer and Hell Fest; Charles Durning was in both of the When a Stranger Calls films plus Dark Night of the Scarecrow.