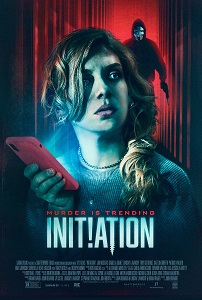 Minor spoilers. At Whiton University, frat boys and sorority girls party, drink, make-out, partake in all the cliches we’ve been watching on film for the past forty years. (I wonder, what do students who don’t pledge the Greek system do with their time?) Anyway, after intervening in a potentially awkward situation, science major Ellery takes her so’sis Kylie home and tries to find out why she was passed out on the bed of douchey frat Beau, behind a locked door in a room that also contained Ellery’s swim-team superstar brother Wes… There’s chatter about ‘what happened last year’, but Kylie just doesn’t remember.

The campus has an ongoing problem with frat boys “identifying ho’s to protect the bro’s” by adding single exclamation marks as comments on photos. Ellery tries to covertly run a DNA sequence on Kylie’s shorts to find out if her brother was involved in something bad, but before she can get her answer Wes is brutally murdered by a hooded killer wearing a reflective mask (that looks like the Transformers symbol) and power-drilled to a door.

The cops come, they interview his friends, his sister, evidence is discussed, the figurehead of the school makes a speech – but is he just scrambling to cover up something more sinister? Notably, a number of older male characters growl and grumble to their sons and legacies about keeping quiet. Two more boys from the frat are slain, then Ellery and her friends find themselves locked in the main building on campus, with the killer roaming free.

Initiation is definitely an impressive looking beast and opts to treat its psycho-killer opus with a dose of reality, insofar that the killer is neither superhuman, nor able to effectively teleport to just the right place he needs to be to pounce. When hit, he limps, when stabbed, he bleeds; would-be victims are able to escape from him by hiding in good places.

So why only three stars? The film plods a bit at an uneven pace, taking a full thirty minutes for anything horror-related to happen, and early on I was lost in a pool of characters who seemed to have confused purposes, culminating in no absolute lead to identify with rather than a bunch of possible suspects, as well as others who just disappear from the story altogether. It could have done with a bit of a re-edit, perhaps starting with the murder and then flashing back to the events that preceded it. A couple of the actors are also clearly way older than their characters. In more pertinent terms, I correctly guessed the killer towards the end due to the weight given to their otherwise minor presence.

Blurbs-of-interest: Spot Debra DeLiso from Iced and The Slumber Party Massacre as the assistant, Dana; Lochlyn Munro was also in Freddy vs. Jason, Hack!, Scary Movie, and The Tooth Fairy.