Sucks to be Soles 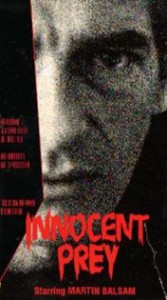 Poor P.J. Soles… As if being saddled with the worst perm in Texas isn’t enough, one night she spots her new husband’s car at a motel and decides to creep outside the window and find out if he’s cheating on her.

Her suspicions are confirmed when she sees him doing a young hooker, and then made worse when he produces a knife and slashes the girl’s throat as they climax. At home, she confronts him and as he makes a move to do away with her, the police spring up and cart him away.

Later, hubby escapes from prison and returns to the house to finish off P.J., doing in a few luckless cops as he goes. She evades him again but this time he flees, so she sees fit to take some time out down under and visits her friend Gwen in Sydney.

The Sheriff back home (Balsam: Arbogast! ARBO-FUCKING-GAST!!!) later informs her they found a burned body with hubby’s signet ring and all is well again. Only we know better: hubby set it all up and has hopped a ship to Oz, ever committed to his cause.

Rodeo P.J. – everybody loves her

As if this isn’t enough, the sub-Norman Bates landlord at Gwen’s place has hidden cameras all over the girls’ house and watches their every move, obsessed by the new arrival, and jealous of her burgeoning romance with single dad, Rick. When the first loon arrives, what will second loon do, I wonder?

Early on in the film, P.J. ponders that if there such a thing as a habitual criminal, perhaps she is a habitual victim. Hell yeah, sister! From the arms of one psycho into those of another! Innocent Prey should be suffixed The Misadventures of the World’s Unluckiest Woman. Nothing goes right for poor P.J., and when Gwen disappears, well, where else could she go!? These wackos gravitate towards her. And just wait for that final freeze frame. Come to my house, Peej, I won’t kill you! Promise!

Mass sludge of conveniences aside, Innocent Prey is a solid little thriller, sort of a proto-Sleeping with the Enemy by way of Terror Train, possibly explaining why it was released in 1991, seven or eight years after it was made.

P.J.’s always likeable charisma carries much of the weight, but director Eggleston – who later helmed weird arty-farty slasher Cassandra - builds up some palpable tension here and there, most notably in the scenes where Hubby comes back to the house.

A ridiculous film by any measure, but an entertaining one for sure.

Blurbs-of-interest: Aside from her role as Lynda, Soles was also in The Tooth Fairy and Uncle Sam. She also narrated the documentary Halloween: 25 Years of Terror; Martin Balsam was, duh, Arbogast in Psycho; Kit Taylor was in Eggleston’s other film Cassandra; Debi Sue Voorhees – playing the hooker – was Tina in Friday the 13th Part V and was also in Appointment with Fear.