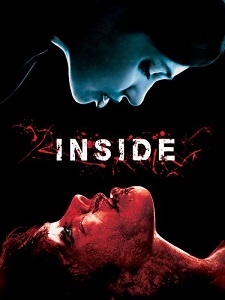 Here’s a weird failure – I watched this back in 2010 and obviously thought I’d added it to the site at the time, as my go-to wad of notes just says: “see hudsonlee.com”. Spoilers!

Soooo, this’ll be an awkward review as I don’t remember a whole lot about it beyond it being ridonkulously violent and gruesome, as – Wikipedia tells me – Vanessa Paradis’ youngser sister is an about-to-pop mom, whose husband died in the car crash she survived some months earlier.

Now, on Christmas Eve, a mystery woman shows up at her door asking to use the phone. Pregnant lady – Sarah – declines and when the woman gets weird, Sarah takes her photo through the window and from that, works out she’s been being stalked by this broad for some time.

Various other people find reasons to show up: A co-worker, Sarah’s mother, police, and crazy lady dispatches them all with knitting needles n’ such until the two go at it, and it’s revealed that crazy lady was in the other car and lost her baby, so now wants Sarah’s.

If you thought Haute Tension was going mental on the gross-o-meter, give this a spin. I’ve said it before and will again, but masses of blood doesn’t a great move make, and while Inside packs a lot of tension and a nail-biting dilemma, I’ve never wanted to see it again in the decade that has elapsed, so maybe it’s a good thing I’ve forgotten much of it.