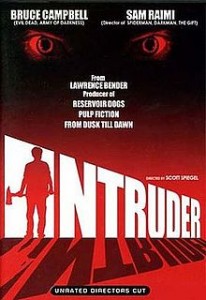 A.k.a. Night Crew: The Final Checkout

Laughter Lines: “I swear to God, if my brother hadn’t hit him in the head repeatedly with a blender, he would’ve killed me!”

As someone not into The Evil Dead, I was always quite blind to the pedigree of the creators behind Intruder. The intervening years since that first viewing of a heavily-cut version on cable back in the 90s set me right to a degree, but I’m still no fan of that series, or a Tarantino appreciator, so have always been consigned to view Intruder as I would any other slasher flick.

Most of us have hauled boxes and tapped till keys in a supermarket at some point in our lives, and before I saw the film the first time, I often mused about the numerous opportunities a killer roaming the aisles of a supermarket would have. The tiny village Co-op I worked in was a fraction of the size of the Walnut Lake Market, where the employees are told that their days there are coming to an end as the owners have decided to sell up.

This announcement coincides with the reappearance of checkout girl Jennifer’s violent ex-boyfriend, Craig, who’s just out of the clink and wants an explanation as to why she never wrote him back. A violent altercation ensues and Craig is eventually ejected from the store at closing time.

As products are marked down for clearance, an in-shadow killer starts doing away with the youthful workforce one by one in particularly gruesome ways: Head in a box crusher, eye on to one of those dealt-with-post spikes, head bisection via meat saw… Eventually, only Jennifer remains and stumbles upon the chopped up corpses littered around the store and soon finds herself on the run from the killer.

Intruder is cheap looking for the most part, but that hasn’t stopped Spiegel et al throwing their all into creating an energetic slasher flick. The camera angles alone put many more expensively lensed horror films to shame, but that’s nothing compared to the gory denouements afforded to the cast. The uncut version restored almost two minutes from the previous release, where the buzz saw kill was entirely removed, and clumsy edits forced upon it.

The influence of Three Stooges physical comedy is evident, with gushing blood in place of cream pies, comedically huge knives, a killer with a wacky motive (their identity obvious thanks to various releases showing them on the cover), numerous comical touches and a knowing wink to those of us who suffered through our minimum wage summers, nicking ourselves on box cutters, dropping products that little too hard so we could write off the contents and eat/drink it, dealing with asshole customers and managers on power trips. It’s a wonder a crime like this hasn’t actually happened!

A seminal entry late in the game, prone to overratedness by gorehounds, though curiously given some of the sweeping statements made about ‘proper slasher movies’, Intruder has zero nudity and virtually all of the grue is directed at the male cast members, with only one off-camera female kill – be interested to see what Carol Clover made of that.

In spite of the box and promo art work, Bruce Campbell and most of the other ‘names’ appear for all of sixty seconds, which probably angered a few fans of his way back when.

Blurbs-of-interest: Renée Estevez had her turn as final girl in Sleepaway Camp II; Sam Raimi and Bruce Campbell appeared in Maniac Cop; Ted Raimi had a bit-part in Blood Rage.