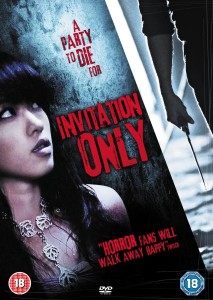 Taiwan’s “first slasher movie” is more of an answer to Hostel than it is a straight-up bodycount pic, with down-on-his-luck chauffeur Wade randomly passed an invite to a society function by his rich client, Mr Yang, who can’t be arsed to go and instructs the youngster to claim he is the mogul’s cousin.

Once at the party, Wade, and four other ‘newcomers’ are introduced and there’s some spiel about writing down your wildest dream on the back of the invite, that the host makes a reality. Wade wants a sports car and consequently receives one, but is soon clued in, along with his fellow debutantes, that they’ve been selected because they’re allegedly ‘impostors’ – poor people either stealing from wealthy clients or transgressing some other high-society sin.

To be honest, I couldn’t make much sense of this part: the three less ‘valued’ characters have all done somethung fundamentally wrong but I couldn’t work out what either Wade or nice girl Hitomi were supposed to have done that would earn them a death warrant.

Each newbie is attacked, slashed, and then put ‘on show’ for the baying crowd of rich folk to see tortured and murdered. A corrupt political wannabe has his balls fried with an electrified jumper cable and a light-fingered nurse has some amateur surgery carried out on her face. 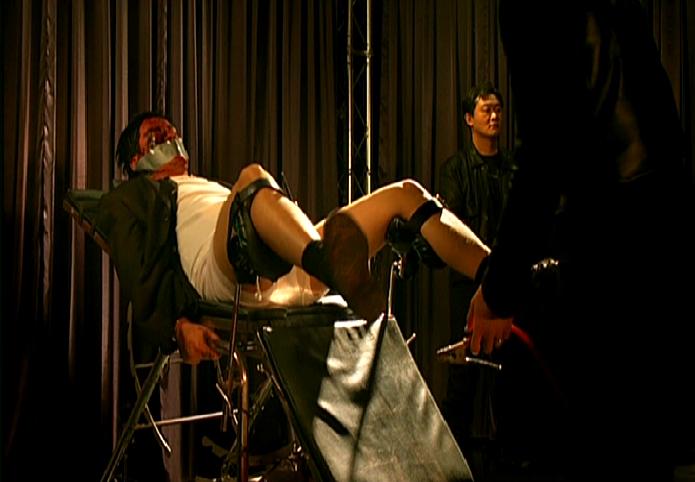 Wade and Hitomi do their best to escape but find themselves thwarted over and over again until they’re forced back into the lion’s den and have to fight fire with fire. Or, rather, sharp implements with other sharp implements.

There’s a decent amount of tension and liberal bloodletting – the electrodes-to-the-bollocks scene is especially cringe-inducing and grim. That aside, there’s not much new material worth lapping up in Invitation Only and it plays out in a very similar way to Eli Roth’s American counterparts, a couple of scenes almost directly lifted from them. Still, it passed 96 minutes without boring me so it’s worth a look, if not only to see how Asia does the job.

On a side note, I love how the cast credits are rounded off with “and Liz”! As if we all know who this Liz person is. I know a couple of Liz’s. This Liz, though, evidently as important in Taiwan as Madonna or Cher, plays the red-dress victim at the beginning. All hail Liz!!