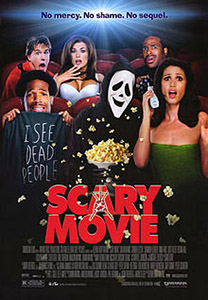 The tsunami of 90s teen horror was always going to end up with this happening. The eventual combo of two parody projects, originally to be titled Scream if You Know What I Did Last Halloween, Scary Movie came before the endless onslaught of affiliated productions including Date Movie, Epic Movie, Superhero Movie, Meet the Spartans, and four – count ‘em – sequels to this. Yes, the tagline told porkies.

Naming their film after the working title of Kevin Williamson’s script, Scary Movie works best when it’s specifically parodying the teen slasher tropes, too often straying toward fart gags, gay jokes, and pothead humor as a fallback. But the slasher ones are at least good. 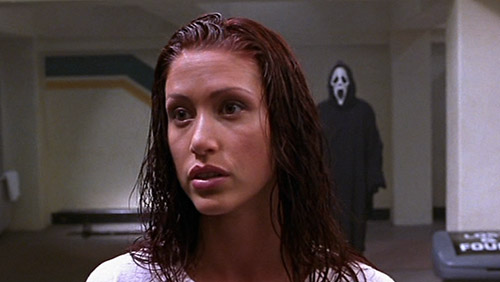 After sexy teen Drew Becker (Carmen Electra) is killed by a Ghostface masked loon, the students of the local high school worry that they may be targeted in payment for running over a fisherman and tossing the body in the sea a year earlier (though the victim wasn’t even involved in that, so no idea why they’d think it?) Virginal Cindy Campbell (Faris, in a career-making role) is at the centre of it all – could it be her booty-thirsty boyfriend Bobby? Angry jock Greg? Two-faced Buffy? Then there’s Officer Doofy, ball-busting reporter Gail Hailstorm, and various other possibles.

The plot is actually entirely redundant, as the film moves from joke set-up to joke set-up, at its strongest when Cindy is in full Sidney Prescott mode, with side-jabs at The Matrix thrown in to good use, great send-ups of Tatum’s “wanna play psycho killer?” moment, the cinema murder at the start of Scream 2, and the soon-to-be overdone Blair Witch and Sixth Sense parodies. 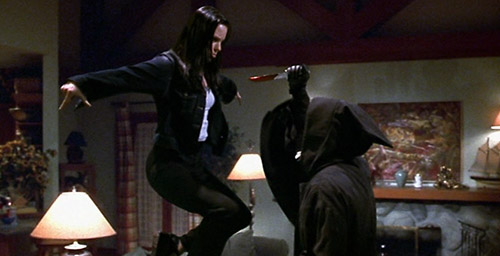 Plenty of the cast die only to reappear in the sequels as the same character; some are killers but then not; some seem entirely surplus – was Shorty supposed to be Randy?? – and a good chunk of the gags have become entirely cringe-inducing in the intervening years. Avoid the sequels like the plague.

Blurbs-of-interest: Faris played it straight in Lovers Lane and weird in May; Shannon Elizabeth was in Jack Frost; Lochlyn Munro later appeared in Hack!, Freddy vs Jason, The Tooth Fairy and Initiation; Jon Abrahams was in House of Wax; Dave Sheridan was in Victor Crowley.

tagged with before they were famous, death on campus, I know whatcha did!, Scream, slasher, spunky final girl