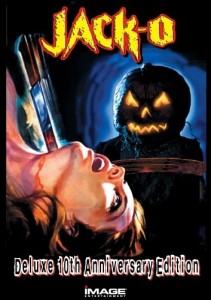 If you can get past another killer with an oversized pumpkin for a head, then there’s a little bit of mileage in this Fred Olen Ray production – which should tell us all we need to know.

We learn from the flashback dreams of a young boy (director’s son Latshaw, with all the charisma of a belly-up fish) of his ancestors’ curse from a nasty warlock, who summoned the title creature 81 years earlier to scythe up his rival’s bloodline.

Beer-fuelled teenagers unearth the demon on Halloween, who picks up where he left off, but notably fails to kill any of the target family members, instead doing away with some annoying ancillary characters, such a right-wing neighbours and stock horror movie workmen.

After a gratuitous shower scene, Linnea emerges as babysitter to the Jack-O’s prime kill and her sister (Wicks) spends most of the film running around, teasing her biker boyfriend. 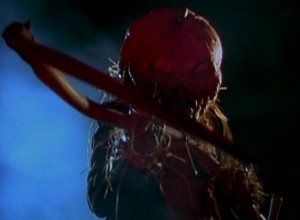 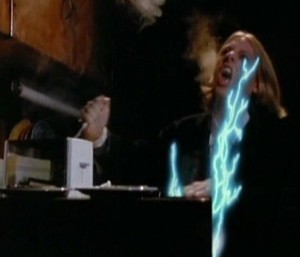 Frustratingly uneven pacing and a killer who flits all over the place at will gets under your skin more than the sickle appears to – but death by toaster is a high point.

The most interesting factor is the appearances of Carradine and Mitchell, both of whom died before the film was released.

tagged with after they were famous, calendar carnage, children are evil, Nu-di-ty, slasher, slasher films that aren't supposed to be funny but are funny, star power