Jason and the Boys

A lot is made about final girls here, there and everywhere, but less so about final boys, who are a rarer creature.

In terms of the biggest slasher franchise, quite a few young men have actually made it out intact alongside the Ginnys, Chrises, and Trishes. Yup, let’s pay tribute to the Final Boys of Friday the 13th… 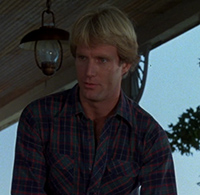 Does Paul survive Jason’s debut rampage at the counsellor training camp in Part 2? Who knows? Nobody it seems, almost 40 years on there’s been no definitive answer. Rumours that John Furey walked off the set before he could shoot his final scenes have since been denied by everyone involved, so it’s likely it will remain a legend, Ginny …a legend. 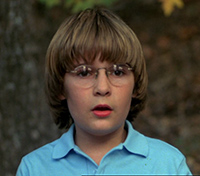 Nobody with a Y chromosome definitively survived Friday the 13th‘s Parts 1-3 and it’s therefore quite interesting that the first male to escape death at the hands of the J-man (or his mom) was a 12-year-old. Hmm.

Horror freak and hobby crafty Tommy – reportedly an homage to make-up king Tom Savini – is quick to suss out a way to fool Jason, thus saving his sister and himself from the business end of a machete. 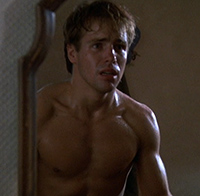 Some years after the events of The Final Chapter, a still traumatised Tommy is sent off to a youth clinic where a ghoul in a hockey mask begins laying waste to the other residents. In spite of his demons, Tommy has clearly found the time to put in a lot of work at the gym. Despite being the lead, Shepherd mutters only 22 words over the course of the whole film. 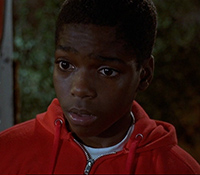 A visitor to the Pinehurst clinic of A New Begininng, Reggie is a bright spot in this much-hated entry: A sassy little kid, possibly a proxy for younger Tommy, who takes on the “mystery killer” with a construction vehicle, but also serves to get manhandled a lot so Tommy, or heroine Pam, can attack the killer as they free him. 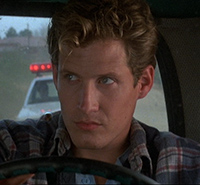 Mathews took over the role for Jason Lives an unspecified amount of time after Part V‘s events, though I tend to see most timelines put him around age 25. Figuring that the only way to banish Jason from his head once and for all is to burn his corpse, he inadvertently ends up resurrecting him and, actually, being responsible for the scores of murders that follow over the ensuing films. Way to go, Tom. 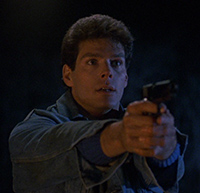 Party guest at his cousin’s failed surprise birthday bash in The New Blood, Nick rebuffs the come-ons of bitchy Melissa to fall for telekinetic girl-next-door Tina, who has just resurrected Jason from his watery grave. He doesn’t do a whole lot to help put him back, but of the Crystal Lake FB’s he’s easily the one you’d never get bored of staring at. 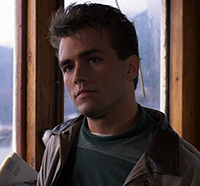 If you and your graduating class got a celebratory cruise to New York City, would you really want to go on your dad’s vessel? No, but Sean is a good son who can’t live up to pop’s expectations, but is forced to take the captain’s role when Jason bloodlessly hacks his way through everybody else on the ship.

Nod also to Toby the dog, who survives the carnage! 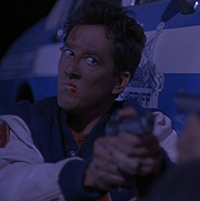 Unwitting nephew-by-marriage of Jason Voorhees, Steven also has no clue he’s a father until his ex rocks back into town with their baby, just as a resurrected-through-other-bodies Jason is also planning a homecoming, culminating in a fierce battle for the soul of the surviving members of the Voorhees bloodline to send Jason to hell. He’s one of the few characters ever to wear glasses and not die (although he loses them part way through).

LeMay is notable for having played a different role in the unrelated Friday the 13th TV series. 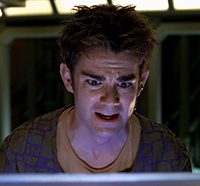 Intergalactic student from the year 2455, Tsunaron’s survival in Jason X is a bit of an afterthought as, unlike most other final guys in the franchise, he’s neither related to nor romantically involved with the final girl, and kind of just happens to be in the right place at the right time. His love for android Kay-Em might qualify I guess, as she technically survives, albeit as a decapitated robot head. 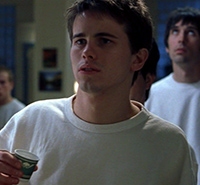 Institutionalized Springwood teen Will exists on a diet of Hypnocil and refusing to deny the truth of Freddy Krueger. But when his love Lori finds herself at the centre of Jason’s reign of terror – orchestrated by Krueger – Will breaks out to rescue her, and the two of them end up as the last kids standing in the crossfire of their battle. 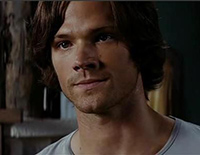 Supernatural star Padalecki had already done House of Wax and Cry_Wolf before landing the role of lead guy in the 2009 Friday reboot, which sees him frantically searching for his missing sister, Whitney, employing the help of Crystal Lake vacationer, Jenna, while following clues and discovering the legend of Jason Voorhees is true!

Well done guys, you all made it! Except maybe you, Paul : /