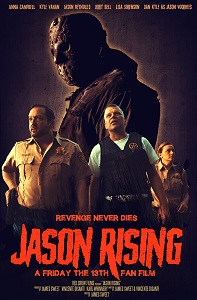 We should all be in awe of the fans keeping Jason in our hearts and on our screens while the court case surrounding the rights to the name or whatever it is grinds on and on. Spoilers ensue.

After Never Hike Alone / in the Snow and Vengeance, 2021 served up Jason Rising, a quirky follow-on from, I think, The Final Chapter, co-produced by the team behind the Never Hike films.

Jason is taken away by the Wessex County Sheriff and two deputies to be buried in the woods not far from Camp Crystal Lake. In the present, the Sheriff’s son, now in that role, is called upon to help a pair of Marshalls hunt down a trio of female convicts who killed and cut off the dick of a guard at a labour farm. The women run into the off-limits section of the forest to hide out at the abandoned camp. 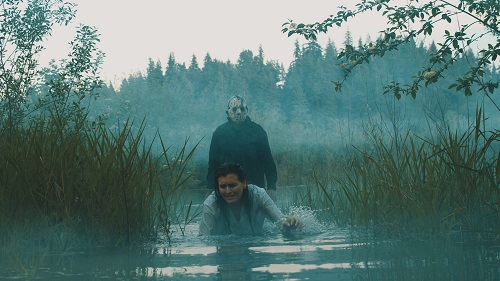 Nearby, Pamela Voorhees’ headless corpse reanimates itself and totters through the woods to resurrect Jason and set him about killing the intruders, as well as doing away with some herself before locating her own head. It’s worth praising the choice of actress to play a young Pam in flashbacks – she looks just as I’d envisage a young Betsy P.

Jason merrily does away with the convicts and the Marshalls before hunting down the Sheriff and his lackadaisical deputy, Eve, who sends out a call for help when Jason has her cornered – and it’s overheard by the most unexpected of individuals…

The surviving pair make it back to the correctional farm and are attacked by the re-complete Pamela just as ALICE sweeps in and takes her head off again! Alice!!?

A coda reveals that she evidently survived the ice-pick through her head and was put into witness protection (although the file is just in a box with ‘confidential’ written on it). She then receives a call from her therapist – Dr Ginny Field! – and the cops deposit Jason’s body back into Crystal Lake.

The love for the series classics is evident, although I was confused early on as to when this was set, as two of the cops who bury Jason in 1984 look exactly like the duo in the present, and if it slots in with the Never Hike films in any way. Alice’s survival is a stretch given we saw her skeleton at the end of Part 2, but is at least explained in quasi-just-go-with-it-believable way.

Some comedic asides circumvent the tension here and there, as different production teams opt for different perspectives of which Jason they’re going for. Here, it’s a little bit wacky as he pulls out the entire spine and skull of one poor schmuck – but these varying interpretations of the lore are all welcome while Hollywood continues to let the series rot.

Blurbs-of-interest: Vincente DiSanti played Jason in the Never Hike films; Anna Campbell appeared in Never Hike in the Snow but as a different character.