Spread your wings and DIE! 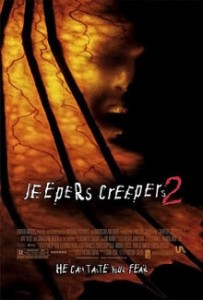 “He can taste your fear.”

Laughter Lines: “You were waving pom-poms at people this morning and now all of a sudden you’re a psychic hotline?”

All the artwork for this film has a 2, but the film itself has a II. A II! Aggravating.

The original Jeepers Creepers dealt with the road trip from/to hell for a couple of college siblings, who encountered an organ-harvesting demon that wakes up every 23rd spring, for 23 days, to eat people. Well, the bits of them it wants.

This time, creator Victor Salva changes gear quite drastically. As we now know the beastie can fly, Jeepers Creepers II doesn’t have an ace up its sleeve. A few days after the events of part one, The Creeper’s final day of feasting, a school bus full of basketball jocks and their quartet of cheerleaders (you have to look for the fourth, but she is there!) is disabled along the East 9 highway. 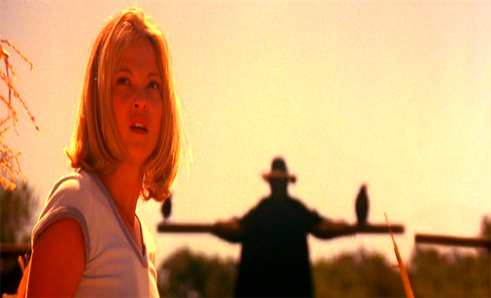 The adults are instantly jetted away to unknown fates so The Creeper can dine out on the youthful members of the group, while he is hunted by the distraught father and brother of a young boy snatched at the very beginning of the movie in one of its more effectively spooky scenes.

Much of the ‘action’ orbits around aggressive debates inside the stalled bus. The film’s best scene, where The Creeper ‘selects’ who from the group he wants to nibble on, ushers in droning ‘high drama’ about whether they should kick off the bus those who are chalked for a chewing on, thus comes racism, brotherhood, all of which goes on way too long and involves too many unlikeable characters. 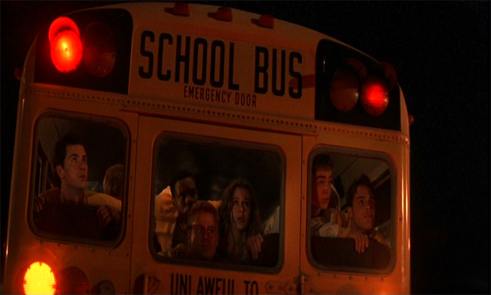 After what seems like four hours, Ray Wise, his son, and dog, arrive and unleash some homemade weapons on The Creeper, which echoes Quint’s fishing trip from Jaws. Things then skip over the escape attempts of a trio of teenagers who are accosted by the fiend until all parties come together and The Creeper’s final day draws to an end. This allows for some of the awesome makeup work of the critter right up in your grill, and he’s still pretty scary.

There’s enough to like in this second outing but it pales massively when compared to the first, suffering from the absence of The Creeper’s frankly petrifying truck, and overloading things with waaaay too many teenage characters, a lot of whom are indistinguishable, lack the acting chops to support the majority of the picture that rests on their shoulders, and too few of whom die. Onscreen, at least. 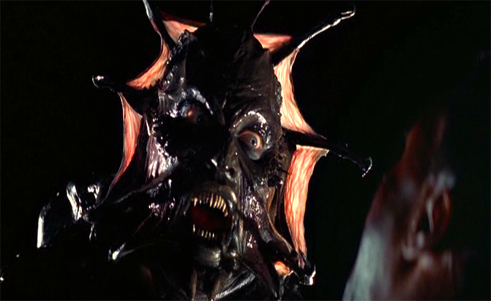 Whereas we had the concerned psychic in the first movie, here a teenage girl falls under convenient clairvoyance (see Laughter Lines), which is truly crowbarred in to paper over the enormous cracks left by a script without the characters having this knowledge. Though it does allow for a cameo from Justin Long, which is a plus point. The film also runs a good 15-20 minutes too long.

There’s a lot of subtextual analysis of this one, which is often cited as a gay horror movie, for its villain who favours the bodies of cute teenage boys over nubile girls, although The Creepers is at least coded as a male character, so that kinda makes sense. It’s good that a sexually ambiguous character is included, better still that he’s not gruesomely killed off and plays his part in saving the day.

Attempts to make this into the Elm Street-style franchise it seemed to aspire to are flawed by both Salva’s 23-year rule (designed to avoid such an outcome, according to him) and a general flatness. Still, the third film, set in 2024, looks like it’s eventually going ahead in the next couple of years. Hopefully it will take the opportunity missed here and provide some backstory to The Creeper as well as adding it to a good scary tale. 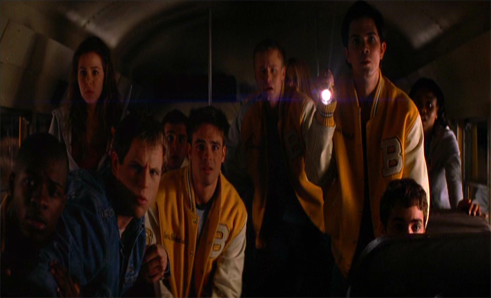 Blurbs-of-interest: Jonathan Breck was also in The Caretaker and Mask Maker; Kasan Butcher was in Drive In; Josh Hammond was also in 7eventy 5ive and Dead Above Ground; Al Santos was in Killer Movie.