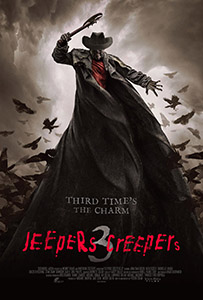 We waited, dude, not quite 23 years, but we waited 14 years for the next instalment of Jeepers Creepers.

To quantify how Jeepers Creepers 3 (not a III to match II - most irritating) comes across, imagine that instead of another movie, they’d decided to opt for a cheap horror channel TV series. It looks like a 90 minute pilot for just such a thing. Name it Poho County or some shit, and focus on the lives of the people caught up in The Creeper’s 23-year awaited banquets.

One might even think that the film could’ve been shot around 2008 by another director as a for-DVD stop-gap while Victor Salva worked out what direction he wanted to go in next. Y’see, Jeepers Creepers 3 is really Jeepers Creepers 1.5 – it’s set between the other two movies. WHY? What will this possibly add?

The sad answer is nothing. If anything it detracts from the mythos of the existing films, in much the same way as each Wrong Turn sequel and prequel and midquel cheapened the savage impact of the original. See that series for how the FX work became less and less convincing and more like dollar store Halloween masks for series mainstay Three-Finger. That’s not a far cry from Jeepers Creepers 3. That it was played in theaters for but one day before premiering on the SyFy channel should also be taken as a message of forewarning.

What plot there is crowbarred into things picks up right after the winged beastie flies off with Darry Jenner. The cops try to impound the Creep Mobile but soon find it’s some kind of sentient machine, riddled with traps that cannot physically exist in the given space (unless steel spikes can bend?). The Sheriff returns – remembers the carnage from ’78 and calls in Creeper Hunter Michael, who owns a pick up with a mounted gun on it.

Hey, we’ve been here and done this!?

Elsewhere, Meg Foster and granddaughter are worrying about not having enough hay for their horse. Grandma keeps talking to someone who is revealed to be the ghost of Kenny (remember the Kenny and Darla story?), who buried something on the farm the day before he died, 23 years earlier. Granddaughter, Addie, goes to try and purchase hay, has brief flirtations with hay-purveyor Buddy, and accompanies him dropping off other orders for the afternoon.

This links on to a quartet of dirt-bikers who happen across Creeper Mobile in a field, try and break into it and end up skewered by its many traps. They’re assholes, so nobody cares.

Meg Foster digs up the thing Kenny buried, and it’s a severed hand of the Creeper. Touching it gives you a full back catalogue of its life, what it is, where it comes from, etc. Is any of this shared with with audience? No. When the Sheriff comes by and touches it, experiencing the same intake of information is it shared? No. Neither is it used to defeat The Creeper, SO WHY BOTHER?

Addie is kidnapped by The Creeper and finds herself trussed in the back of his van with the last surviving dirt-bike kid. Why they’re wrapped in sheets and ropes before having whichever organs Mr C wants from them is just another one for the ever growing FAQ that should probably be addressed in the DVD booklet, along with ‘Why does Meg Foster look 103 years old?’

Side note: I always get Megs Foster, Ryan, and Tilly confused.

The Sheriff, Sgt Tubbs (last seen in JC1 and apparently only a day older), and the hunter guy take on the Creep Mobile, which is now also bulletproof (tires included) and can drop little mine-bombs like you get in Mario Kart. My head went into my hands for a minute here. 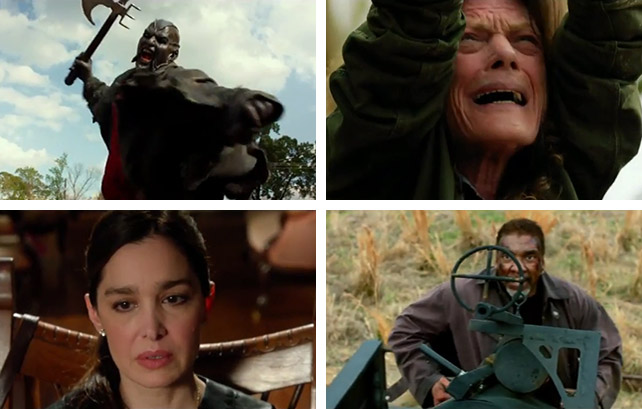 Eventually, Addie is able to escape, so I think she was supposed to be the lead? The film flits between characters so much it’s impossible to attach yourself to anybody for long enough to root for them. The Creeper goes to retrieve the hand Kenny buried and instead finds a sign that says ‘We know what you are’, shrieks into the night, and Buddy climbs aboard the schoolbus that will feature in Jeepers Creepers II.

WAIT! said I, if he has already experienced the nightmare of this creature then A). why the fuck is he going to a basketball game the very next day after 14 people have been murdered, and B). why in that next/last/whatever film does his character not speak up and say ‘oh hey, this thing attacked us yesterday!’ Retcon central.

What positives there are only orbit around it being good to see the Creeper Mobile back in play (those Jigsaw-lite traps though…), some decent photography here and there, a good score, and Breck is fine in his signature role – though that heinous red sweater needed to go. Everything else looks cheaper, drier, hugely unenthusiastic about itself. I can only think that budget constraints were so tight this was deemed a way of springboarding the franchise back into people’s minds in order to forge ahead properly in Jeepers Creepers 4, as the core demographic for teen-horror released in 2017 will only have been toddlers when the first two came out.

Certainly, the end, where Gina Philips appears for literally about thirty seconds, hints towards a 2024-set next round, but given how long it’s taken this instalment to surface, we could be waiting till 2047.

Blurbs-of-interest: Foster was also in Stepfather II; Jonathan Breck was in The Caretaker and Mask Maker.

tagged with after they were famous, sequel city, spoilers, what the hell!?