Jigsaw has a lot to answer for 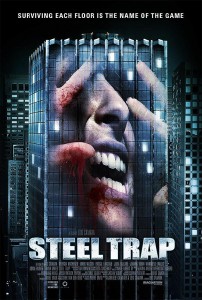 “Surviving each floor is the name of the game.”

At a New Year’s Eve party for media types in a skyscraper, several people receive a text message inviting them down for the “real party” on a lower floor. They attend and find insulting place names that call them loser, two-faced, pig, heartless etc and clues that send them off on a scavenger hunt.

Amongst the group are a TV chef, a failing rock star, a sycophantic agent and a bitching couple and they begin to fall victim to a shiny-masked killer who slices, hangs, axes and stabs them one by one.

Much of the content of this German production is lifted right out of the Saw franchise with TV monitors galore, cryptic clues left by the killer and would-be ‘sensational’ twist ending, which becomes more and more predictable as the cast is shrunk down to the last few stragglers, most of whom begin to suspect each other – is one of them in on it, or is it all part of some bigger game?

Well, the Dire-logue should clue you in on the motives of the villain when things finally unravel – it’s all a big revenge scheme for an ex-nerd who is offing all the people who made their life a misery before they found success. To be fair to it, I quite enjoyed the exposition, ridiculous though it was and the actual ending is something you don’t see all over the place.

Steel Trap is let down by uneven performances from a chiefly British cast affecting American accents, unlikeable characters and some really stupid dialogue. At one point, a guy attempts to dial out on his cell phone to find that the signal is blocked: “Signal is blocked! What does that mean!?” to which his whiny girlfriend replies – in all seriousness, you understand – “it means he blocked the signal!” And it’s this kind of idiocy which sums things up perfectly.

tagged with accents from hell, Euro-horror, get your own ideas!, rip-off central, slasher, spoilers, weird-ass twist