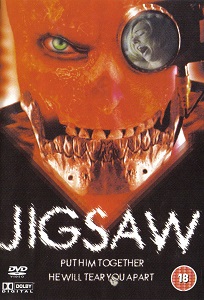 “Put him together, he will tear you apart.”

Laughter Lines: “As a wise man once said: I’d rather have a bottle in front of me than a frontal lobotomy.”

Although it takes 51 minutes for anything remotely horror-related to happen in this 79 minute film, once it gets going, it’s not half bad.

An art teacher sets his students a task to take one segment of a mannequin and decorate it however they like to meet up again and reassemble it, kinda like that game you used to play with the folded up piece of paper where you draw different sections of a person.

They congregate at a bar to describe what factors influenced their section and put the character – named Jigsaw – back together. With a buzzsaw for a hand, a shotgun on his arm, and a working camcorder over one eye, the mannequin has a Terminator-esque quality. We learn one girl is a battered wife, another chickened out on the suicide pact with her sister, and one guy is a self-confessed psycho. 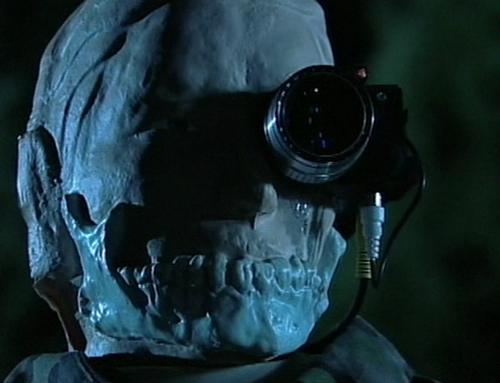 As they get drunk and prepare to ritually burn Jigsaw, he inexplicably comes to life and starts to cut-up his creators, taking an arm here, a leg there, etc. Assuming he’s going to make a companion for himself, the film never actually gets that far, ending abruptly with a shock, and leaving the fate of one student up in the air.

With a 3.5 rating on IMDb, I can see why this would fail to inspire much optimism, given that the horror segment of this horror film lasts only 24 minutes after a lot of talking and nothing is explained – it would’ve likely worked better as a segment in an anthology. Still, Jigsaw is kind of a creepy dude (echoing Morty, the wooden mannequin in The Fear to some degree) and there are a few good ideas at play here and a few interestingly drawn characters.