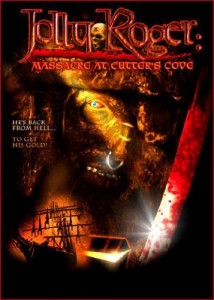 “Some things should stay lost at sea.”

Dire-logue: “Just drinking a little, smoking a little dope and all your friends got massacred, right?”

This cheap n’ cheesy quickie from the same studio that brought us the Scarecrow films takes many cues from The Fog in a tale of a murderous pirate back from the dead to behead the present day ancestors of his treacherous crew.

Considering the studio’s choppy resume, Jolly Roger nicely outperforms the previous efforts both technically and in terms of its general enjoyability. Other films that are pilfered include Leprechaun and Jason Goes to Hell. The short running time is a plus, as the sky-high body count escalates at a nice pace to outweigh the detective efforts of the boring teen couple who witness Roger’s slaughter of their high school friends – four corpses in the first fifteen minutes!

The killer, meanwhile, yo-ho-ho’s his way through town collecting severed heads to put in his Dead Man’s Chest with pirate-themed one liners at every turn, kinda like the lovechild of Freddy Krueger and Jack Sparrow. The sword decapitations are sloppy but gory and there’s a funny hand-chop thrown in as well. Endless clichés by numbers, with generous T&A, gallons of gore (though rum is nowhere to be found, much to Roger’s chagrin) and characters so thinly drawn that they barely have enough screen time to do much but die! Not for all tastes for sure but genre completists should get a kick out of it.

tagged with accents from hell, get your own ideas!, Nu-di-ty, rip-off central, slasher, suck it