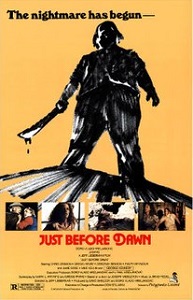 “The nightmare has begun…”

Laughter Lines: “Where we’re going is no summer camp!”

This Oregon-shot campers-in-peril flick was somewhat overlooked at its late-1981 release, presumably due to the veritable tidal wave of similar films falling out of every nook, and the fact that Universal backed out of purchasing it, leaving it to be distributed by a small indie company, which tanked its chances of making a splash.

Therefore written off as just the next in a long line of Friday the 13th cash-ins, it’s a pleasant surprise that Just Before Dawn turned out to be one of the stronger examples of its era, with a very good atmosphere created by director Lieberman (who co-wrote under a pseudonym). Despite contemporaneous accusations of being too derivative of The Texas Chain Saw Massacre, Lieberman claimed never to have seen it at the point the film was shooting, instead taking most of his cues from Deliverance.

A quintet of teens – made up of more capable actors than usual – head into the mountains to explore the land that one of the group’s father’s has just acquired. They hike, swim, cross swaying rope bridges and scare away timid backwoods folk. But we know something had is coming, thanks to their run-in with a fleeing hunter, whose nephew copped a machete in the balls. 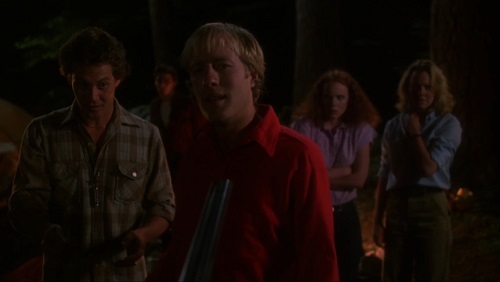 Ignoring the warnings as usual, they eventually end up falling prey to a pair of inbred mountain-dwelling twin brothers (both played by Hunsaker), who treat the newcomers as toys, while George Kennedy’s ranger canters about the forest talking to his horse, Agatha.

Proceedings are overseen in a fairy standard manner, but there’s a great ending that reverses the character situation that existed at the start, with a particularly inventive method used by the final girl to claim victory over one of the loons.

Wrong Turn owes a lot to this one.

tagged with get your own ideas!, Nu-di-ty, slasher, spunky final girl, star power, the 80s