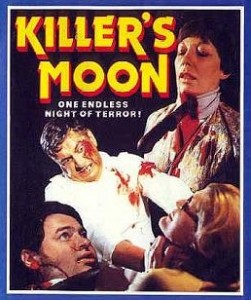 “One endless night of terror!”

Dire-logue: “One minute you’re a person, then you’re a sheep…all covered in blood.”

I was born in 1978. The year of Halloween, Grease and…uh…Killer’s Moon, a film possibly even more fucked up than The Texas Chain Saw Massacre. ‘Ooh, I must see it!’ you may crow. But wait, remain in your seat with the belt fastened, for this is not a recommendation by any means. Tobe Hooper’s film is screwy in a truly horrific way. Killer’s Moon is shot to pieces. It’s like that mental middle-aged woman in accounts who talks gibberish on eleven different subjects at once.

It’s part Clockwork Orange, part exploitation trash and part girls’ school comedy. Said schoolgirls are in fact a choir travelling through the Lake District – yes, it’s 70s England! – when their bus conks out and they take refuge in a secluded hotel. Meanwhile, we learn that four nutters have broken free of an institute and, thanks for a new type of therapy, believe they’re dreaming.

The loonies eventually crash the big sleepover to rip off blouses, rape and strangle any jailbait they can get their grubby mits on. They abduct others and force them to…prepare food for them! OH MY GOD! The depravity! Sooner or later, a couple of camping buddies team up with the girls to escape and reap their revenge.

Author Fay Weldon rewrote much of the girls’ dialogue but some of what comes out of their mouths is unbelievable. We start off with; “I just want to die and get it all over.” Fine, stupid, but fine. But later, proto-heroine Agatha turns to a friend of hers and tells her: “Look – you were only raped. As long as you don’t tell anyone you’ll be fine.” Only raped!?!? By an insane escaped convict, no less! Oh, don’t worry Lucy, all is well, just internalise the anxiety for the next sixty years and all shall remain just tickety-boo.

Whether or not Killer’s Moon is supposed to be humorous is debatable. It could be that it just sucks. Characters don’t question anything they’re told, trust absolutely anyone and spit venomous insults akin to “you’re just horrible!” at the killers as if they’re all at a seventh birthday party. Throw in a random three-legged dog who saves the day, indifference to bodily violation and nightgowns so cheaply made they simply fall off in a passing breeze and you’ve got one of the weirdest 89 minutes one could hope to experience… Approach with caution.

Blurb-of-interest: Birkinshaw later directed a slasher remake of The Masque of the Red Death, which is immeasurably better.

tagged with Nu-di-ty, Rule Brittania!, slasher, slasher films that aren't supposed to be funny but are funny, what the hell!?, who finances this crap!?