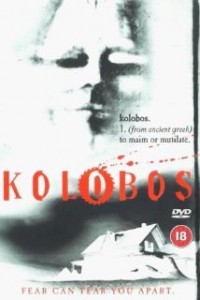 “Fear can tear you apart.”

Laughter Lines: “How about a nice cup of shut-the-fuck-up!?”

Who can remember life before Big Brother, when reality TV was all about MTVs The Real World? Kolobos sure can! Released a matter of days after the Dutch premier of BB, it beat the vast majority of the slew of slashers that latched on to the concept.

Hence, it’s more of a reaction to forerunners of the now-standard format. Kolobos is a weird little film, beginning with the hospital recovery of a girl, who was hit by a car and appears to have been self-harming. Gradually, she remembers what happened to her… She answered a classified ad for five ‘freeloaders’ to go and live in a house where their day-to-day interactions will be filmed “for VHS” (dating the film severely!)

They gather, goof around, suss one another out, and are talked into watching the slasher franchise The Slaughterhouse Factor, by Erica, who plays the killer Fanny van Troven in all six installments (featuring the rather fabulously titled Part III: Death Strikes Thrice). Kyra struggles to acclimate herself and it becomes clear that perhaps they are not alone in the house (bar the technician). 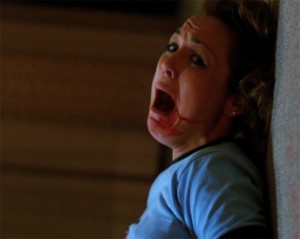 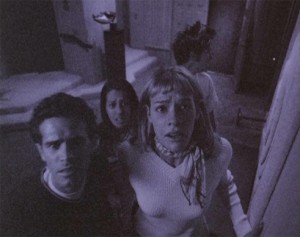 When Tina stumbles into a lethal trap in the kitchen – a grisly affair featuring spring-loaded circular-saw blades – it sets off a lockdown. All windows and doors are covered by steel shutters and the ‘contestants’ are now in the main part of the game. Kyra, off her meds, keeps seeing flashes of faceless individuals and footage of a man peeling off his own skin, muttering ‘kolobos’ over and over.

Naturally, the others suspect her, and despite her protestations, continue to die as a mouldy-faced loon picks them off one at a time after disorienting them away from the group. Kyra finds the bodies, including a decapped head made up like a disco ball! She fights the killer, succeeds, then what? 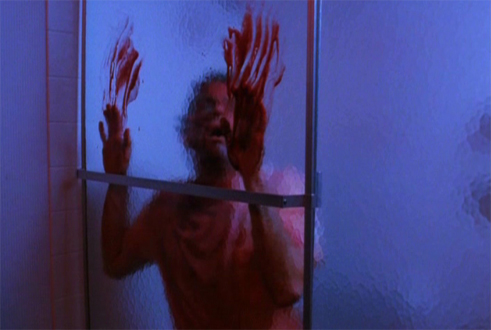 Up to this point, Kolobos has gone through the motions of a tech-loaded slasher film: Not everyone is simply stabbed to death, the killer here favours booby-trapped things. However, after 70-odd minutes of pretty entertaining fare, it’s back to the present and, with no evidence supporting her claims, Kyra is released from hospital.

The last fifteen minutes or so drag out the final girl meandering around her house, suspecting noises, hearing things… Then she types for a bit, browses the paper, and calls up the classifieds to place an ad identical to the one she answered. Is she the killer? Has it done a Haute Tension on us? Was any of it real? 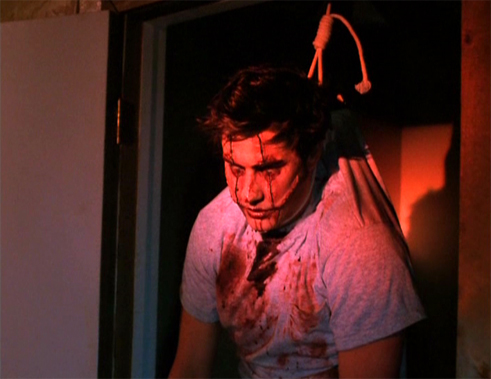 As an ending, it sucks. Nothing is learned or confirmed one way or another, except that Kyra is batshit cray-cray. It’s a common flaw in ambitious horror: Great openings are often unfurled by bollocks final acts. Here, Kolobos reveals itself only to be a trip down a blind alley.

Journey or destination? Because the latter might be lame, but the former is at least an inventive (for its time), well-acted, and amusing romp. Much of the catty dialogue between Erica and Tom is infused with thinly disguised insults, and The Slaughterhouse Factor movies look awesomely bad (“Oh my God! There’s a fork in her neck! A fork!”) The characters are also more pleasant than most, making it that little bit harder to watch them die. 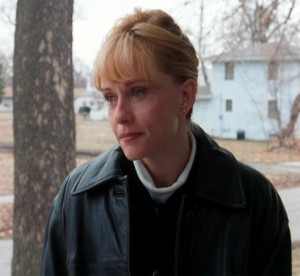 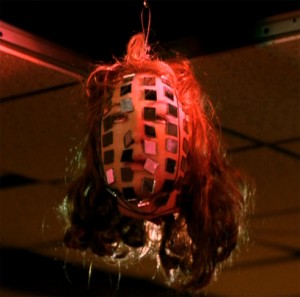 Out of date, out of mind. Chop off the last few minutes and there’s much fun to be had, and it’s still far more engaging than the strikingly similar My Little Eye, which surfaced three years later.