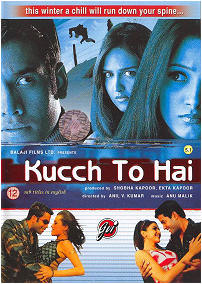 Translation: There Must Be Something

“This winter a chill will run down your spine…”

To sound like some racist asshole – I can’t tell this film and fellow Hindi slasher Sssshhh… (also from 2003) apart. I’ll make the excuse that it’s been years since I’ve seen either, but notes from the occasion suggest this is the lesser of the two projects.

As that other film, and blatant Nightmare on Elm Street rip off Mahakaal (1993), a whole lotta Kucch to Hai is recycled material from North American slasher films of the post-Scream boom. It’s a Bollywood trip down memory lane…

Beginning with an almost shot-for-shot rip-off of Jennifer Love Hewitt’s confessional dream from I Still Know What You Did Last Summer, we quickly move into flashback territory and the story of how college kids Karan and Tanya fell in love, punctuated with ear-melting pop songs and love ballads, as is prerequisite in Indian cinema, even in genres as diverse as horror.

All of this stuff takes an HOUR. SIXTY MINUTES. At this point, Tanya takes the blame for Karan’s exam faux pas, risking a failure for herself, and thereby prompting a group of her friends to sneak into the creepy Professor Bakshi’s home to change the grade on her paper. However, their mini-heist is interrupted when the Prof comes home and, during their escape, they find his dead, virtually mummified wife in the basement, and duly run him over with their van as they make their getaway. Three years later, the group recongregate at the wedding of two of their friends at a ski lodge and find the party crashed by a figure in a black mack who dons a curved blade.

There’s little attempt to disguise the fact that Kucch To Hai unashamedly lifts its entire plotting from the original Last Summer flick, detouring via another shot-for-shot recreation of the killer-in-the-backseat opening from Urban Legend, albeit with a slightly different outcome and the theme from Mission: Impossible replacing ‘Total Eclipse of the Heart’ as the song on the radio!!!

A scene stolen from Scream 3 sneaks in once the stalking kicks off in the last twenty minutes, with very little bloodshed and a confusing unmasking twist at the finish line. It’s a tough race as the film grinds on relentlessly towards the two-and-a-half hour mark, taking pauses from the horror for its musical interludes, and far more concerned with the developing love triangle between the main characters.

…and not much of this

Western audiences will be nothing short of aghast at the stylings, with a veritable rainbow of colour and overdramatic camera work to accentuate the drama, so it’s not possible to tell how technically good the film is compared to other exports from its home country without a good base knowledge of Indian cinema – which I don’t have.

Both dialogue and songs are subtitled, although the actors occasionally cross over into English to make their points.

tagged with Bollywood, get your own ideas!, rip-off central, slasher, slasher films that aren't supposed to be funny but are funny, what the hell!?