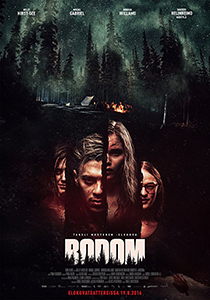 I’ve lost count of the number of horror movies that claim to be ‘based on true events’ over the years, which usually means the source event has been evolved by producers thirsty to bend it into a tellable tale, be it Ed Gein into Psycho and/or The Texas Chain Saw Massacre, Wolf Creek, or even the folklore used in Urban Legend - at least here, the Lake Bodom murders actually occurred.

In 1960, two teen couples were attacked while camping out at the Finnish beauty spot; three of them were fatally injured, the fourth survived to become the prime suspect, eventually arrested 44 years after the fact, and acquitted, meaning the killer is effectively still undetected.

The story fascinates slightly morbid high schooler Atte, who, with his buddy Elias, dupe gal-pals Nora and Ida into accompanying them to a party at a lakeside cabin his family owns, to be joined by other friends the next day. This is all a ruse for him to investigate his theory on what actually happened 56 years earlier (yay! it’s not 5, 10, or 20 years!), and there’s no cabin either. The girls don’t have meltdowns over it, but are peeved. Atte, it seems, wants to reenact the crimes to gauge the likelihood that he’s got it solved.

As darkness falls and they sit about the campfire by the lake, tiny hints suggest that there might be someone else there – was that a flashlight amongst the trees across the lake? Oppressed religious girl, Ida, is still sore over nude photos of her taken when she was drunk at a party and were seen by the entire school – but who took them?

Lake Bodom tosses a twist into the mechanics halfway through (I half-guessed it), but with so long left, what next? A second twist, unlikely as it is, shifts the film into its Wolf Creek gear, with an excellently original tow-truck scene of terror. It doesn’t go to lengths to explain the connection between what’s going on and the 1960 murders, wisely leaving that cloaked in mystery, as the original killings probably always will be. 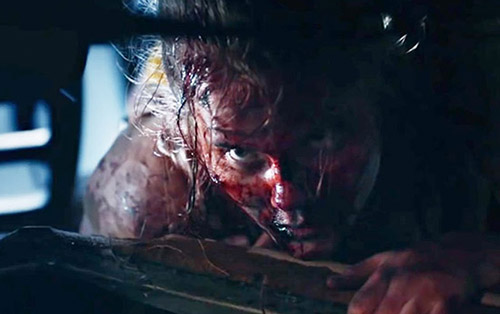 Beautifully lensed, with shades of Cold Prey alongside echoes of Haute Tension – European slasher films tend to go further with their production quality, rarely turning out shot-on-video cheapies, and stepping away from tying up every loose end. Nevertheless, it feels like the opportunity to make an amazing straight-up teen slasher film is squandered by the plotting, which is undeniably contrived, and leaning towards disproportionately torturing the female characters.

An exercise in brilliant craftsmanship behind the camera, which is worth it alone.

tagged with based on a true story, Euro-horror, slasher