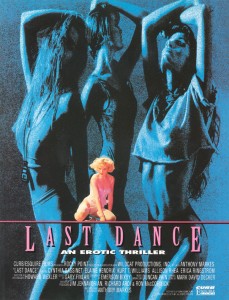 Dire-logue: “Was that your mother I ran over in the parking lot? You should teach her not to chase cars.”

If Angela Lansbury turned up – to visit another of her numerous relatives – Last Dance could easily be mistaken for an episode of Murder She Wrote.

As the killer is finally revealed (and it’s not hard to guess who it is), new-girl/heroine Jamie protests her innocence by whining “it’s not fair!” like a seven-year-old having a tantrum but still manages to defeat the killer with a glitter ball (of course!) until they later return with a Phantom of the Opera facial for another go after Jamie wins the crown, somehow disguising themselves as a busboy, despite gaping scars down their face!

Blurbs-of-interest: Director Markes had already helmed Bikini Island and had also cast Kelly Poole in it. Kimberly Speiss was in Psycho Cop Returns. Elaine Hendrix had some moderate success with roles in Romy & Michele and The Parent Trap remake amongst other things.

tagged with before they were famous, get your own ideas!, Nu-di-ty, obvious identity of killer, slasher, slasher films that aren't supposed to be funny but are funny, what the hell!?, who finances this crap!?