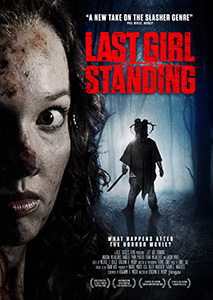 “What happens after the horror movie?”

I’ve long wondered what happens after the final girl staggers off to freedom having bested the killer: What does Marti/Alice/Sally tell the cops? What’s the process of the investigation, the clean up, the press? How many shrinks do they see? How does their family react?

The Texas-lensed Last Girl Standing doesn’t quite cover these bases, instead opting to skip forward a few years in the life of woodland-massacre sole survivor Camryn. So the first few minutes is a quick meta-overview of Camryn taking down The Hunter, an occult-ritual loon in a furry antlered mask, who offs half a dozen of her friends.

In the now, five years on, Camryn is a lonely, withdrawn figure who works at a dry cleaners, doesn’t have any friends and wakes most nights from flashback nightmares of the murders. However, this all begins to change when new employee Nick enters the picture and takes a liking to her. 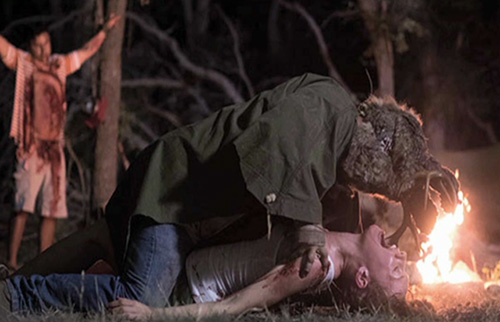 This coincides with Camryn believing The Hunter has come back, as she’s accosted at her place of work. Naturally, no one else sees a thing and nothing can be proved. Nick offers to accommodate her for the night and she meets his circle of friends, whom she begins to believe will be the next targets of the killer.

Camryn’s episodes unnerve the others as her paranoia grows, and it’s not immediately clear if anything she’s experiencing is real or in her head. She is befriended by Danielle, one of Nick’s friends who also carries some survival guilt. Together, they drive out to the burial site of The Hunter to give Camryn closure so she can be free!

But can she? Can she ever really get over it? Last Girl Standing, albeit more of a character study than a slasher film for most of its running time, isn’t able to reach it’s 87th minute without bookending itself with another killing spree – was The Hunter back all along? I ain’t telling.

While the new perspective allows for a fresh take on things, it still doesn’t feel as if we learn that much about the aftermath of Camryn’s experience. It’s not too far removed from Tommy’s character in Friday the 13th Part V, all broody and silent, seeing Jason everywhere, and other sequels where the heroine spends most of the running time trying to convince others that the killer has come back. 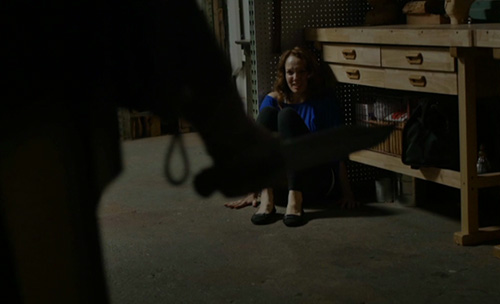 A good character study in part, the slasher bits deliver as well (though viewers who demand boobs, joints, and skinny dipping in their teen-kill flicks should avoid it), but something is missing, and it’s not as unconventional as it thinks it is – a film set in the days and weeks after the massacre would have been more interesting, although it would likely entail a higher budget than what’s in evidence here. That said, nothing is aesthetically wrong with the production and Villalobos puts in a strong performance as the twitchy title character.

Last Girl Standing would make a good double-header with The Final Girls as writers and directors search for new ways to focus on new aspects of a tired out genre. Not Scream Queens though. That can go fuck itself. Maybe a sequel concerning a survivor’s anonymous group is in order?