Legacies of the 90s: Stab-a-thon Stars

As Kevins Costner and Bacon, Holly Hunter, George Clooney and Tom Hanks paid their slasher movie dues in the films of the 80s, the 90s saw many a familiar face from teen-oriented TV shows rushing to board the terror train following Scream‘s unprecedented success.

Some have remained famous, lots of vanished from the radar and some probably didn’t expect any success at all when they signed on for three scenes and a murder in a video shelf flick they thought nobody would ever see. Bet they hope nobody asks about Teenage Death Camp Massacre VIII now… 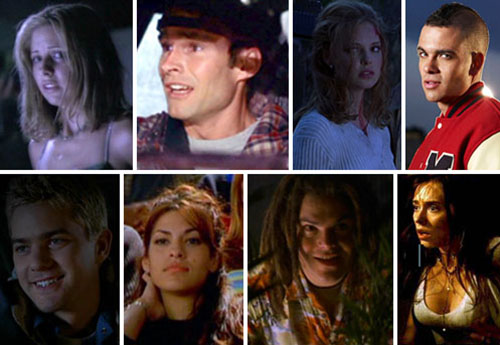 So, starting at the top left, Sarah Michelle Gellar, arguably the biggest teen star of the era thanks to her role as ass-kickin’ demon hunter Buffy the Vampire Slayer, she played the role of defenceless girly victim in both I Know What You Did Last Summer and Scream 2. She was also originally to play Sasha in Urban Legend before scheduling conflicts got the best of her. Apart from appearing in the first two Grudge movies, after marrying Last Summer co-star Freddie Prinze Jr., she’s disappeared a bit…

Seann William Scott, known as potty-mouthed Stifler in American Pie, became one of Death’s first screen victims in Final Destination but his career has flourished since. Katherine Heigl, recently surfing a wave of rom-coms after the success of Knocked Up, donned final girl shoes in Bride of Chucky and then “the Drew Barrymore role” for Valentine, which she seemed less than impressed with…

Puck from Glee (Mark Salling) looked a lot different (and significantly less buff) when he played Naomi Watts’ little brother in Children of the Corn IV: The Gathering. He later had a small role in the dull The Graveyard.

Another big name from the teen flick circuit, Joshua Jackson had been a fairly successful child star in all three Mighty Ducks movies and a leading role in Dawson’s Creek; aside from his role in Urban Legend and a cameo in Scream 2 (sharing a scene with Gellar), he also starred with Gellar, Ryan Philippe and Reese Witherspoon (who avoided horror at the time) in Cruel Intentions and almost-horror flick Gossip. He’s now in Fringe.

Eva Mendes joins Salling as another Corn almnus after debuting in Fields of Terror, the fifth in the series. She moved on to Urban Legends: Final Cut before mainstream Hollywood success followed. And who could forget Jack Black’s uncredited cameo as Titus the dreadlocked dope-smoking pool boy in I Still Know What You Did Last Summer? I bet he wishes he could!

Rounding off this box, Jennifer Love Hewitt, co-star to Neve Campbell in Party of Five, took the lead in both Last Summer films. 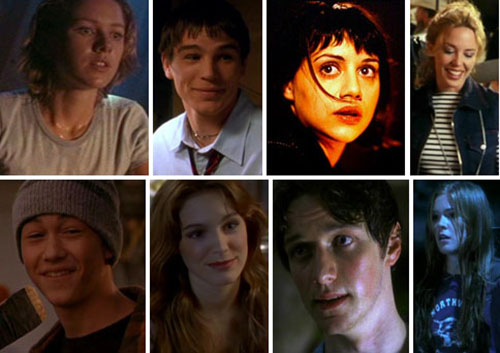 Mrs Liev Schrieber, sometimes known as “Naomi Watts”, yet another survivor of the neverending Children of the Corn franchise, playing Salling’s big sis and eventual heroine. Josh Hartnett was Jamie Lee Curtis’ annoyingly slappable offspring in Halloween H20, in which he was smug boyfriend to Dawson’s Creek star Michelle Williams.

The late Brittany Murphy was on the verge of stardom when she played the heroine of Cherry Falls; and mini Aussie pop queen Kylie Minogue – relatively unknown in the US but with over 30 UK Top 10 hits to her name – was the ‘big star’ to be offed at the beginning of Australian Scream off-shoot Cut.

Lastly, James McAvoy and Isla Fisher turned up in the strangely eclectic German slasher film The Pool, which starred Cherry Falls‘ Kristin Miller. Both were gruesomely dispatched fairly early on but can look back and laugh now they’ve had admirable Hollywood careers.

And lastly, I couldn’t get a good shot of the lovely Anna Faris, who, before she became a comedy queen thanks to doing all four (ugh!) Scary Movie‘s, turned up in the type of film they parodied, Lovers Lane, where she played Janelle the plucky cheerleader, who just wanted to make new friends but got gutted with a hook for her trouble. Here she is on the cruddy UK cover with it’s naff international title…

So there we have it, the biggest faces of the 90s horror scene, eleven of them died (one of those twice!), none of them went topless (well, some of the guys did), and only one came back for a sequel! Ha ha @ Jennifer Love Hewitt!

tagged with 90s horror month, before they were famous, Halloween, I know whatcha did!, sequel city, slasher, spoilers, star power, yo! Hollywood