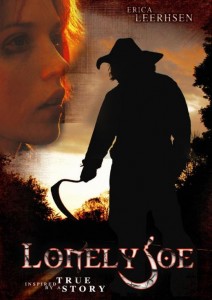 “Stay off the tracks.”

Dire-logue: “Why don’t you bring someone in?” / “Who – fuckin’ Ghostbusters?”

When a cheap film begins with a stoic declaration that it’s based on true events, my heart dies a little – post-Chainsaw, has there ever been one that was any good? Maybe Lonely Joe will break the curse…

Erica Leerhsen, ironically from the Chainsaw remake, plays Michele Connelly, a New York journalist who is tormented by flashback dreams of her brother’s murder years earlier at the hands of a psychotic farmer who slaughtered countless locals. Now, disappearances are still occurring and Michele grabs a week in her hometown of Solvay, New York, to look for answers.

To be honest, I was ill when I watched it and so found myself losing interest quickly and had no patience for endless dialogue that didn’t lead to anything and under-lit scenes of people traipsing around in the dark. The low budget was off-putting rather than endearing and, Leerhsen aside, the cast provided nothing remotely entertaining and what scant murders there were took ages to begin and were either void of action or off-camera completely and the killer hardly appeared in it.

Things turn out to be more of detective/ghost story than a slasher flick and by the time the twist is unveiled so little had happened and 97 minutes had tick-tocked by so slowly that it felt like I had been there all week with Michele. Painfully slow and boring.

Blurbs-of-interest: As well as the TCM remake re-imagining, Leerhsen was also in Wrong Turn 2: Dead End and later Mischief Night; David Fine was in Sweet Insanity.

tagged with I want to die, slasher, weird-ass twist, what the hell!?, who finances this crap!?