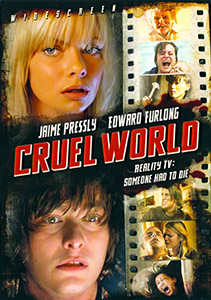 “On this show, you get killed off.”

Reality TV reject Furlong is so incensed by his national humiliation that he decides to produce his own show, housing nine college kids and giving them a series of bizarre tasks to carry out, which either see them eliminated or ‘sent home’. And by ‘sent home’ we mean the Angela Baker definition thereof.

He starts by murdering the woman who rejected him on a show called Lovers Lane. This is much-emblazoned star Jaime Pressly. I’m not really sure what she’s famous for, but the artwork makes a big deal out of her sub-Barrymore role in this.

Four guys and five girls enter the house – all of them walking stereotypes of the laziest kind: The fiery Latino girl, southern belle, bitchy backstabbing (literally) gay, slow-but-kind Utah farmboy… After a task pushes her too far, one girl opts to quit and is kicked into the pool and drowned; Another is voted out, driven away, and buried alive; A third chased by Furlong’s hulking, mentally-challenged brother (Franzese, who was in Mean Girls around the same time) and is locked in a shed, never to be heard from again. 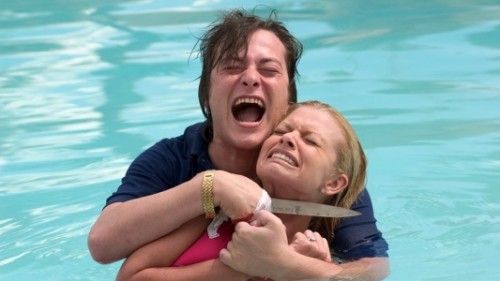 Eventually, the dwindling contestants catch on, find bodies, and are forced into further challenges: Two guys have a caged fight to the death, then they’re made to stand on cones for hours on end… All very Survivor.

Cruel World has some good ideas but lacks the budget or creative team to see them through. Is it satirical? OK, so where’s the wit and barb? Is it horror? OK, why are most of the kills so dry? In its inability to choose what it wants (hey! maybe that’s a super-clever reference to the rejection of the killer!!) it ends up a mess. There is a well done decapitation of a contestant who escapes, and many of the actors went on to better things, but like any reality has-been it’s almost instantly forgettable and no more deserving of your time than My Little Eye, Kolobos, Voyeur.com…

Blurbs-of-interest: Laura Ramsey was in Venom; Aimee Garcia was in 7eventy 5ive; Brian Geraghty was in the 2010 Open House.

tagged with after they were famous, get your own ideas!, slasher, star power, yo! Hollywood