Dire-logue: “You are gonna fuck me right now, or I’m gonna kill your faggot ass!”

Back in the late nineties when everyone and their grandma decided that slasher films were the way to go all over again, there were a lot of attempts to take what worked on the big screen and smallify it for the straight-to-video market, ‘cos, remember, DVD was still a bizarro pipedream which none of us could afford.

Thirteen years later, hook-handy bloke escapes from his asylum, leaving the overly personal insult of “Prison Food Sucks” written on the wall in blood. Now, his shrink is half-brother to the Sheriff/widower of the female victim from years ago, and father to bitchy school queen bee Chloe, who is thus cousin to Sheriff/widower’s lonely daughter Mandy. Male victim from years ago was husband to the school principal, who is mom to Michael, Chloe’s long suffering boyfriend – and he and Mandy avoid one another. Naturally, there’s awkwardness between Sheriff and Principal as it’s believed their spouses were having it away when they got slaughtified. 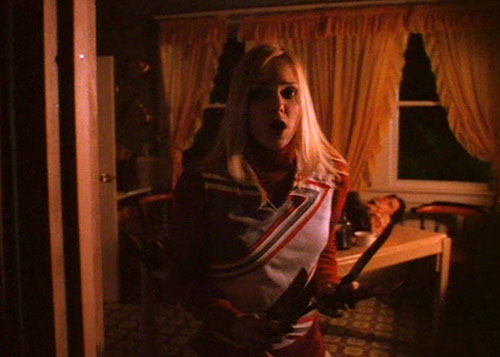 Hook-dude kills a store clerk and a cop and then goes after the teens, stalking them to a deserted farmhouse and offing them one by one until Michael and Mandy put aside their differences and face “THE TRUTH ABOUT THE PAST”, which is quite different from what we’ve been led to believe. To its credit, Lovers Lane has an almost-smart twist. I say almost because it’s difficult to follow and you have to pay attention to the Scoobying of Sheriff and Principal in their scenes to understand some stuff about incest, jealousy n’ shit. Principal becomes slightly annoying; when there’s violence unfolding before her, she stands there and watches, not helping, not even when her own son is in danger! There’s not much bloodshed and the budgetary limitations make the scenes set in the dark (i.e. most of them) difficult to see, possibly as an homage to all the no-cash productions of the 80s where minutes would tick by without being able to tell what the hell was happening. And what’s with the UK title? I’m Still Waiting for You? Who is? Hook-guy? Waiting for who? The teens who were four-year-olds at the start? No, no, no – it’s a stupid attempt to fool people into renting it. The box even says “in the tradition of I Know What You Did Last Summer! There are no Last Summer-style letters sent to anyone here, it’s purely the hook-myth thing.

If you want to watch it, I’ll not stop you (like I could!?) But try to appreciate it’s unintentional sense of mirth: the scrawling of hook-guy on the wall not being enough, Janelle snatches four knives from the block to defend herself when she believes the killer is after her… Inoffensive slasherama that is not easy to hate, you’ll be like “aww…they tried”, even though at times they clearly didn’t. You could do worse.

Blurbs-of-interest: the fab Faris later married co-star Indra (who played Brad) and then divorced him, but she also starred in Scary Movie and it’s increasingly dire sequels and also May; Billy O was later in Shredder.

tagged with before they were famous, calendar carnage, get your own ideas!, Nu-di-ty, slasher, weird-ass twist