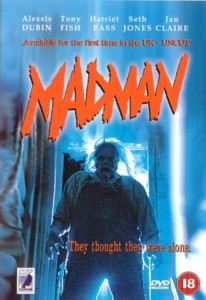 “They thought they were alone.”

It would be all too easy to say: “that Madman, you know the one, that’s a rip-off of Friday the 13th that is!” then take our pitchforks and torches and burn it out. This was an early one for me, a film I just had to see after reading the words “summer”, “camp” and “slasher” in The Splatter Movie Guide. It took a good few months to track down a copy in the hazy days of VHS when uncertificated slasher flicks were rarer than UFO sightings. In fact, so difficult was this film to locate (along with Graduation Day, its sibling quarry at the time), I placed a TransAtlantic call to the Director’s Guild of America to try and contact the director, only to be told he was not a member… Eventually, a Free-Ad located both films a few miles down the road thanks to a handy collector! Glee of this magnitude ensues: 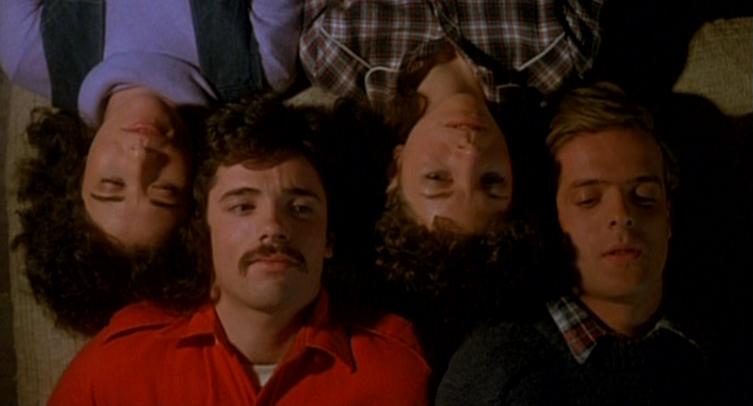 Initially, I was unimpressed with this kind of hackneyed wannabe but, as time and experience has shown me that there are worse things a plenty set to celluloid, Madman has earned an out-of-the-way place in my heart for its ornate creepiness, thanks in large part to its ornate crud-ness. Of course, now everything ever photographed in the history of everything is on DVD, I can no longer wear that badge I had made that said “I saw Madman while it was still a rare, out of print, properly unrated C-movie.”

As were most of the best first wave of slasher films, Madman was shot back in 1981 and originally planned to use the well-worn campfire story of ‘Crospy, the killer janitor’ but, having learnt that a certain other summer camp slasher was using that story, was rescripted into what it now is. Set entirely on one night, a factor which adds to its unsettling aura, we begin with the requisite scene I never tire of in the genre: the campfire story. 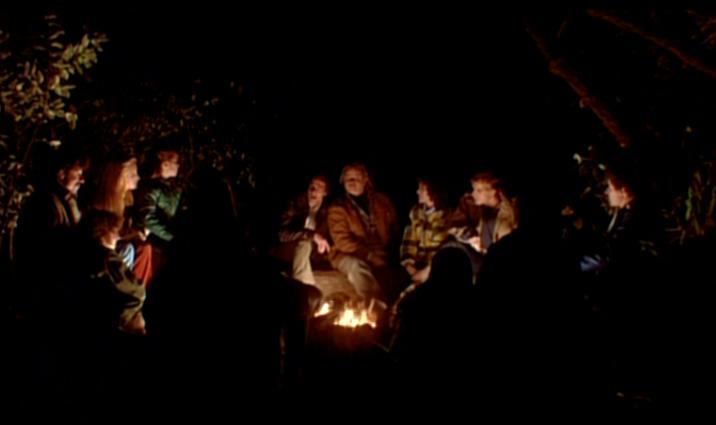 Well, it’s more of a campfire song, as head counsellor at a camp for ‘gifted kids’ (of whom there are but six) T.P. sings the intro to the tale of Madman Marz, a farmer who axed his wife and kids to death and was hanged by the townsfolk, only to have disappeared come daybreak. The woods are his, leave him be, says camp owner Max – if you say his name above a whisper…he’ll come for you. The kids and their Crystal Lake-reject counsellors (of whom there are but six) play scared yadda yadda until cocky teen Jimmy decides to scream and yell that Marz should come and get him. Biiiiiig mistake, my fluffy-haired friend.

As it’s the last night of camp, the kids are put to bed and the counsellors chatter and go off for sex, including a 70’s porn-lite hot tub scene between T.P. and his Squaw of choice, Betsy. What they don’t know is that Jimmy saw a shadow in the trees and went off to explore the forest, happening upon the run down Marz household just a click or two away… When his absence is finally noted and Max is off in town chugging beers, T.P. opts to go looking for him, unaware that the drunkard camp chef has already been slashed to death.

Madman‘s midriff becomes a bit of a drag, truth be told, and relies too heavily on the cliche of one counsellor going out into the woods to look for the one who disappeared looking for the one who disappeared before that one et cetera… Of course, we know better and witness T.P. hanged and his neck broken (all thanks to the arrogance of having a monogrammed belt-buckle). Dave then found him and got his head chopped off. Then Stacy finds him and is decapitated by the hood of the camp truck.

Eventually, Betsy has the sense to dispatch two of the remaining counsellors to go looking for them. “It’s just a final night joke,” they merrily assume and enter the woods and split up to look for them. It’s this golden scene that leads into the most memorable aspect of the film: Ellie. Frizzy-haired Ellie is the feeble girl who hysterically screams a lot but doesn’t help much. Amidst all the horror unfolding around her, she always looks like she’s smiling…

When her boyfriend is yanked out of the cab (and she sits there doing nothing, eventually reaching out once his feet are disappearing), Ellie runs squealing back to camp and can’t find Betsy anywhere – but Marz finds her! A drawn-out cat n’ mouse opus unfurls as the dunagree-wearin’ backwoodsman knocks down doors to get to her and she hides in a fridge. Yes, a fridge. A refrigerator. A cool box. Foolishly, she hobbles out and towards the open door where a big-ass axe is waiting for her and, even in death, she still looks overjoyed about it. 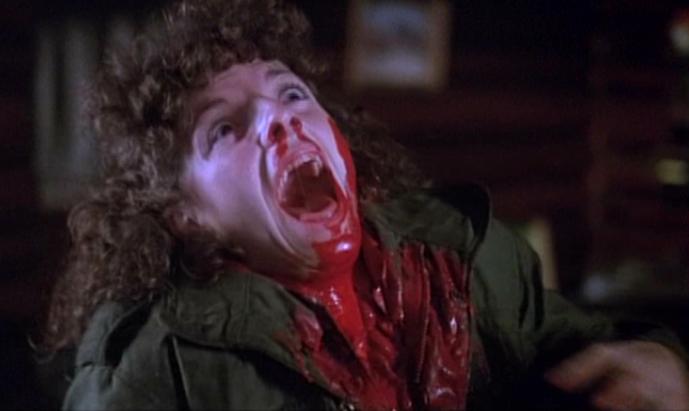 Betsy eventually stumbles upon the carnage and tries to escape with the kids in the bus, opting to go back and get Jimmy, who still hasn’t returned and her final quest leads her to the ol’ Marz homestead and the grisly contents of its basement. I’ll not give away the ending but it’s safe to say they expected to do a sequel that never came to be. 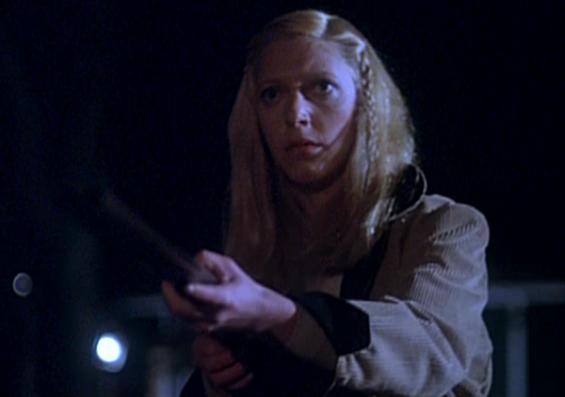 In terms of plotting, Madman does nothing we don’t expect it to (save, perhaps, for some circumstances at the end) but this ain’t always a bad thing: sometimes you just want a straight up coffee without having to go through the rigmarole of it being tall, skinny or a mocca-locca-wocca-chino or whatever. The late Giannone directs competently (and strangely this was his only feature) and makes the necessary scenes appropriately scary by distorting the killer’s features or keeping his head out of shot. Madman also boasts an organic, primal scare factor that the happy, bouncy scapes of Crystal Lake and Camp Stonewater don’t even have. The camp looks real, a bit run down and we only ever see it in the dark, helped by the fact that the film was shot in the winter months. There’s no need for a rainstorm here, we feel the cold from the characters’ trudges into the trees, all wrapped up warm, longing for the sanctuary of the open fire back at the cabin.

You can’t have everything though; when you take receipt of the goods, there’s still the annoying packing material to get through and the cheapness of the production sometimes goes against it, as does the abundance of cliched contrivances: that golden rule of Thou Shalt Not Walk Slowly Backwards is transgressed many a time here.

Some have complained that the cast roster isn’t exactly littered with the silicone-chested beauties of the post-MTV generation and hunky Ryan Phillippe-lite men, though this is merely a distraction, as the axe-swinging horror that ensues isn’t likely to discriminate based on aesthetic appeal, although several of the ‘teen counsellors’ do look like they’ve got a cupboard full of “You’re 30!” mugs, Alexis Dubin included, who is actually Gaylen Ross from Dawn of the Dead, and turned 31 in 1981. Very few of the players have appeared in anything significant since – but who cares – they were in Madman! 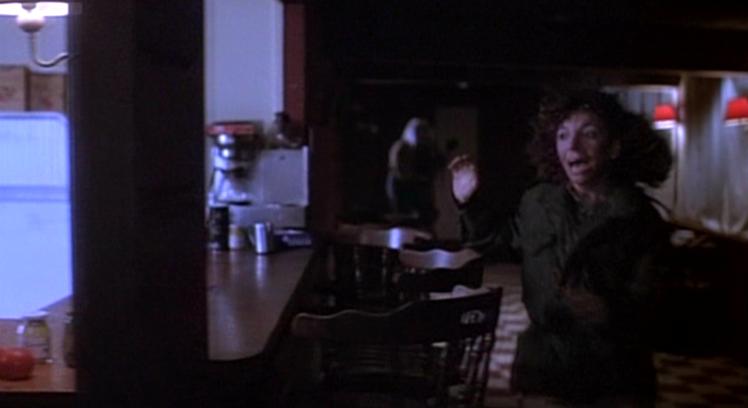 Not a personal favourite, but definitely worthy of the sub-cult following it has harvested over the years and an essential flick for lovers of summer camp slaughterthons, it would make a good double bill with backwoods-brother Friday the 13th Part 2. And there’s still Ellie, of course…

tagged with Friday the 13th, get your own ideas!, hair don'ts, Nu-di-ty, slasher, spunky final girl, summer camp, the 80s