Lesbian camping trip – and not a powertool in sight 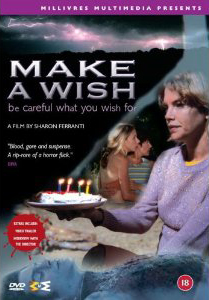 “Be careful what you wish for.”

Dire-logue: “I just don’t like to see ladies bothered by people who’re bothering them. It’s…bothersome.”

Sloppy murders ensue and the running time is padded out with intermittent sex scenes that would look exploitative if the director weren’t herself a family member. At least she creates an interesting group of gay women, which includes a childlike wiccan and a tree-hugging vegan and almost all of the group have had liaisons with birthday girl, Susan and all have an array of sensible shoes. Ferranti doesn’t force any issues of sexuality or feminism, much as it’s gay-boy brethren HellBent, the orientation of the characters is more or less incidental.

Now, I’ve been camping with lesbians and they’re nothing if not prepared for the wilderness. I hoped the last chick standing would go all A-Team on the killer’s ass with a gadget she’d been previously had no use for, or at least throw a cat at them.

Essentially, it’s nothing more than Friday the 13th‘s gay cousin with a confusingly inconclusive finale that’s lacking in the clarity department. All the same it’s a fairly diverting product worth a once over.