The Art of the Kill 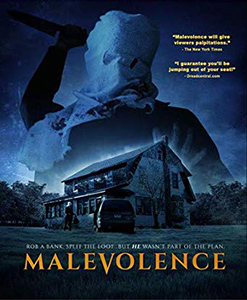 “Ma-lev-o-lence; evil, disposed to injure others.”

A much-praised micro-budget ($70k) homage to slashers of olde, the work of cinematographer Tsuyoshi Kimoto is the star here. His ability to frame and compose angles to wring as much tension as possible out of what little there is visible on screen in the dark compensates for many of the film’s shortcomings.

A kid is abducted in 1989. Ten years later (never nine, never eleven) a quartet of bank robbers make a break for freedom and end up separated. One succumbs to a gunshot wound, leaving his sister and her boyfriend to bury him, making them late for the rendezvous with the fourth member of the group, who has had to take a woman and daughter hostage in his bid to commandeer an escape vehicle. 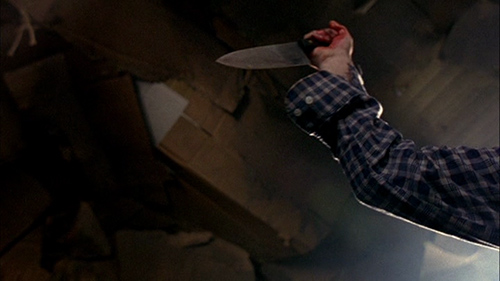 Unfortunately for them all, the chosen point of their regrouping is also dangerously close to the shut-down Sutter Farm, where it seems a serial killer hangs out. When the young daughter escapes and ends up there looking for help, robber dude meets a nasty end, leaving his remaining compatriots to discover the captive mother and only $40k of their almost half-a-mill haul.

The killer appropriates a sheet mask from Dead Robber #2, one not dissimilar to Jason’s sack-mask in Friday 2, emphasized by the check shirt and dungaree ensemble he also rocks. Then, he hangs around in the back of the frame, slowly venturing closer while the two remaining felons argue over what to do next, and mom whines for the return of her daughter. 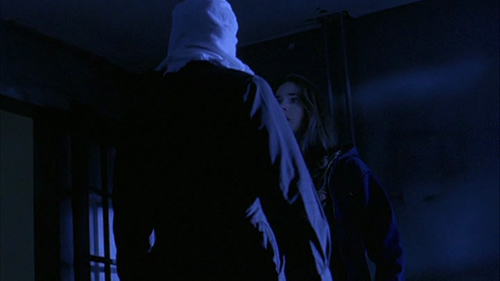 Halloween is also aped to shit, from the bluish hue the film carries after dark, to the distinctive angles that make the old farmhouse look claustrophobic. Off-centre shots pose on-going questions about where the loon is hiding, creating a decent amount of nail-biting. When the blows come, they’re strangely tame, with only a few on-screen murders even occurring. Anyone who’s seen late-90s rarity Freak will notice an overlap in the subdued approach to displaying anything graphic.

So that’s the good. In spite of the acclaim Mena received for delivering a good lookin’ indie flick for the cost of a new car, he seems to have trouble goading convincing performances out of the cast, who present a very stagey approach, as if they’re deliberately not looking over their shoulder when anyone else would sense that other presence in the room. This leaves the film lacking a strong connection with any of the characters because they’re just not very convincing, a trend which I noticed again in Malevolence 3 (the middle film, Bereavement, had a couple of names but I can’t remember much of it now). The mother-child combo should evoke a much deeper level of concern than it does. 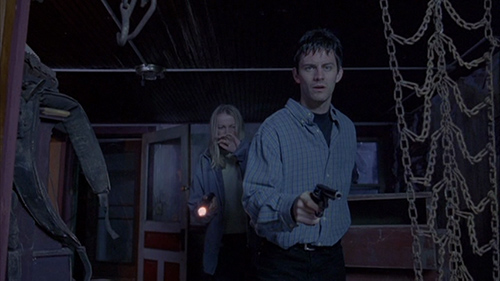 The killer’s identity also offers little to gasp about. An overlong epilogue where the FBI swoop in to stitch up some Q&A feels out of place and wouldn’t be resolved until the third movie came along 14 years later.

A beautiful experiment on a visual level, but the script can’t keep that flame out of the breeze, sadly.

tagged with get your own ideas!, slasher